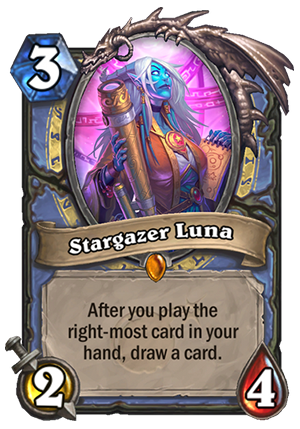 Stargazer Luna is a 3 Mana Cost Legendary Mage Minion card from the The Boomsday Project set!

After you play the right-most card in your hand, draw a card.

No matter if this card sees play or not, I just love them exploring mechanics that wouldn’t be possible in a regular card game, like this one. In MTG, Yu-Gi-Oh etc. you can constantly change the order of cards in your hand, so a card like that would make no sense. But in Hearthstone, where the order is fixed? Exactly.

The effect is interesting, because with this card in play, you might be given a very difficult choice. For example, should you go for the best play this turn, which is NOT the right-most card, or go for a slightly weaker play, which will also draw you a card? Also, effects that generate extra cards (such as Fire Fly) also give you an extra choice. Do you use those to draw an extra card or go for something else? Or even deeper – do you keep such a card to combo with Luna or go off with them earlier? Yes, those choices will sometimes be simple and not really worth thinking about, but eventually players will be put into harder situations. And that’s great.

But, enough about the effect being cool, let’s focus on how useful this card is going to be. First of all, she doesn’t really fit into a slower deck, with a higher mana curve. On average, the card you just drew will cost quite a lot, usually preventing a chain of draws. Slow Mage decks, such as Big Spell Mage, aren’t really struggling for card draw anyway – with such a high mana curve, their hands tend to be rather clunky anyway.

It might seem like a great fit into an Elemental Mage – lots of cheap cards, generating extra cards in your hand etc. could give you a lot of extra draws. But Elemental Mage isn’t struggling with card draw either. If you play the deck, you will notice that running out of cards is actually pretty difficult. So that’s also a no.

In the end, the only deck that this kind of card might fit into is a faster, aggressive version of Mage. Namely, decks that already run Aluneth – decks that need a lot of cycle and can get through the cards quickly, because they’re cheap. And so, this is kind of card that might fit into a Burn/Tempo/Secret Mage (however it will be called after the expansion lands) or maybe even Murloc Mage. Average cost of a card in those decks is rather low, so if you’re in a mid or late game scenario, it might be possible to chain 2-3 top decks. Since your deck is mostly spells, it also synergizes really nicely with Sorcerer's Apprentice, making a lot of your topdecks cheaper. The stat-line, while not impressive, might be good enough to drop it on the curve too if you need to. It’s definitely better than playing a Turn 3 Arcane Intellect (in Tempo Mage, you always want minions in the early game, and skipping Turn 3 gives your opponent some opportunity to come back), and if it survives, it can give you even more value. Alternatively, if you get it in the mid game, you can pretty much guarantee a card draw at one point, and 3 mana 2/4 that draws a card is very good. Even more so if it will draw 2 or 3, which can happen from time to time.

The only situation in which this card is really bad in such a deck is a full topdeck mode. When you draw this as your topdeck and have nothing else in your hand. Then you either skip a turn completely or just drop it as a vanilla 2/4 that will most likely die before you get any value out of it.

I’ve seen people comparing this to Flamewaker, but I wouldn’t go that far. Tempo and damage is much more important in Tempo Mage than more cards, not to mention that Flamewaker is easier to use – you don’t always have to play the right-most card, you can pick any cheap spell from your hand and use it. It doesn’t mean that Luna is bad, it’s just a completely different type of card.

I feel like it might be replacing a single Arcane Intellect in Tempo Mage. And possibly something in Murloc Mage, although Murloc Mage already has some powerful card draw with Book of Specters and it cares even more about the tempo, so I’m not sure. Still, it’s a solid card, but I don’t believe that it will be any kind of metabreaker.

P.S. It might be significantly better if they feature some cheap generated cards that will let you utilize this effect more consistently. Something like a better version of Flame Geyser would go a long way to make this card better. 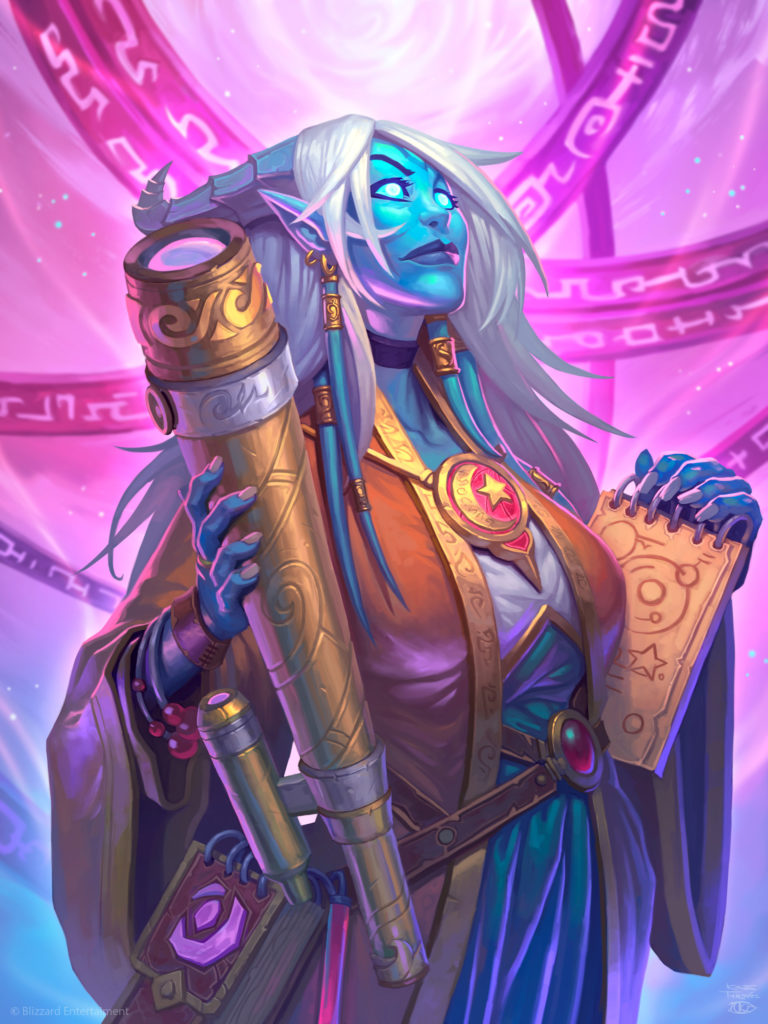