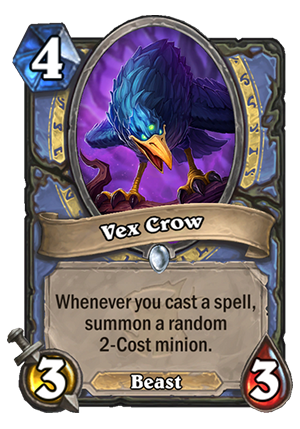 Vex Crow is a 4 Mana Cost Common Mage Minion Beast card from the The Witchwood set!

Whenever you cast a spell, summon a random 2-Cost minion.

This is a bit like a new version of Flamewaker. Both have synergy with cheap spells, and both can be combo’d with cheap spells for amazing effects. This effect is obviously stronger, that’s why it costs 1 more mana.

Now, that one extra mana is actually a significant problem. Compared to Flamewaker, you will often have to wait an extra turn to get some value out of it. With Coin, the problem isn’t that big. You can play this + Coin + 1 mana spell on Turn 4 and it will already be good. But without Coin, you’d often have to wait until Turn 6-7 before you can really start comboing this. You COULD theoretically drop it on Turn 4, but 3/3 minion is very easy to remove in the mid game, so you’d aim to get instant value from it. 2/4 on Turn 3 was much more likely to survive.

Another problem is randomness of the 2-drops. On the one hand, you can get a 4/4 (infamous Millhouse Manastorm), on the other you can get a 1/1 or even a Doomsayer. There will be lots of variance here, similarly to how Piloted Shredder worked.

Mage has access to some cool 1 mana spells. Starting with the classic Arcane Missiles, which will combine a slight AoE board control (or burn damage) with summoning 2-drops, then Mirror Image, which will summon 3 bodies in total, and finally Breath of Sindragosa, which might finally find its home (there was no reason to play it before, as Tempo Mage wasn’t playing lots of spell synergies). The card also synergizes very well with Primordial Glyph. If you can pick some cheap spell out of it (2 or less mana), then you get two 2-drops AND a 2 mana spell for just 2 mana, which is crazy tempo gain.

Overall, I think that this card has potential to be strong. Since tons of Secret synergies are going out, we might see a more classic approach to the Tempo Mage, with more spell synergies, including this card. Whether this card is playable might be heavily tied to whether we see another strong cheap spell for Mage, or maybe another Spell synergy. Right now I’m giving it 6 out of 10, but the rating might get higher if that happens.