Our Jade Druid deck list guide for the Kobolds and Catacombs expansion, fully updated for the post-nerfs February 2018 meta, will teach you how to play this midrange Druid list. This Jade Druid guide includes Mulligans, Gameplay Strategy, and Card Substitutions! 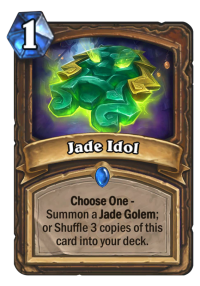 Jade Druid was one of the popular decks to come out of the Mean Streets of Gadgetzan expansion. Three classes got access to Jade synergy: Druid, Rogue, and Shaman. Druid has flat-out been the front-runner for popularizing the style of deck due to its ability to accelerate their mana pool and push out more and more Jades. The card that truly sets the class apart from the others is Jade Idol. It makes the deck extremely hard to beat in a value-oriented/late game matchup because you can continually add Idols to your deck and create monstrous Golems that will eventually overwhelm your opponent.

Jade Druid has been weakest against aggressive decks, but thanks to the addition of Spreading Plague and Oaken Summons, it is now possible to tech Jade Druid to perform well against aggressive decks at the cost of some performance in control matchups. The deck was clearly a worry for Blizzard leading into the Knights of the Frozen Throne expansion that they added Skulking Geist to potentially slow the deck down. Geist, however, wasn’t enough and they eventually made nerfs to Innervate and Spreading Plague. Ultimately, the power of Jades has been strong enough to keep the deck a viable contender throughout its time in the Standard format despite all these efforts.

Kobolds and Catacombs ended up providing Jade Druid with a number of new cards:

Lesser Jasper Spellstone has become a staple in practically all Jade Druid builds, providing Druid with a cheap and effective removal card that can be used to remove small minions in the early game and upgrades up to six damage for dealing with more powerful minions later on.

Many players also opt to use Arcane Tyrant for powerful swing turns with many of the expensive spells used in Jade Druid.

Another common inclusion is Branching Paths, an incredibly flexible and powerful card. It gives you up to 12 Armor, taking you out of reach of aggressive decks, provides card draw in the mirror match and whenever needed, and even works as a small Savage Roar, boosting the attack of all your minions by up to two. A Jade Druid with a wide board is a major threat late in the game, almost reminiscent of Combo Druids of old.

Finally, Oaken Summons and Ironwood Golem provide Jade Druid with a powerful anti-aggro package, generating Armor and pulling a Taunt minion on the board at the same time.

What is the Jade Golem Mechanic?

If you haven’t been following Hearthstone very closely then you might be a bit confused by the Jade Golem mechanic. This is an exclusive mechanic to the Jade Lotus gang from the Mean Streets of Gadgetzan which is made up of the Druid, Rogue, and Shaman classes. Each time a Jade Golem is summoned by a card, the following Jade Golem will be +1/+1 stronger. It also increases in mana cost by one all the way up to ten. While the increase in mana stops at ten, the increase in attack and health does not. You can probably now tell that if you start spawning a lot of Jade Golems they can get out of hand pretty quickly.

The number of Jade cards is limited, but classes have different ways to replicate some of those cards to keep building up their Jade army. For Druid, the primary means is Jade Idol, which allows you to shuffle additional copies of itself into your deck, thus making you invulnerable to fatigue and capable of generating endless Jade Golems.

Another defining feature of Jade Druid is the ramp package that accelerates its mana gain and allows it to play cards earlier than other classes:

Druid does not have access to powerful removal tools, but there are some direct damage spells in the deck:

The Oaken Summons package provides a tool to challenge aggressive decks. Because Recruit mechanic works randomly, the inclusion of Oaken Summons limits the early-game minions that can be used in the deck for best effect. 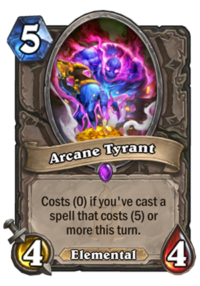 Arcane Tyrant can help you achieve significant tempo swings, as there are several expensive spells in Jade Druid: Nourish (Tyrant negates the tempo loss of ramping up), Spreading Plague (Tyrant adds some power to the board in addition to the Taunt wall), and Ultimate Infestation. Ultimate Infestation in particular is great with Arcane Tyrant, because even if you don’t have the Tyrant in your hand, you are likely to draw it and can then accompany your 5/5 Ghoul with an additional 4/4 Elemental or two.

Druid lacks area-of-effect damage spells, but Spreading Plague is Druid’s answer to a wide board. The Taunt wall can hold aggression at bay for a while, and if you can develop some big Jade Golems alongside it, you can start taking the board back.

Malfurion the Pestilent may not be as fancy as some of the other Death Knights, but he is very powerful and flexible. You can either start gaining a ton of Armor with him, or you can deal a bunch of damage, whichever you need. Synergizes with Fandral Staghelm, providing four minions when played when Fandral is on the board and also providing both Hero Power effects (three Attack and three Armor) whenever Hero Power is used when Fandral is on the board.

Medivh, the Guardian works well with the expensive spells used in Jade Druid and can give you an alternative way to generate tempo in addition to or instead of Jade Golems.

Ultimate Infestation is one of the best cards in the entire game. The effect is simply bonkers, and thanks to all the ramp Druid has available, it can sometimes be played as early as Turn five. If you have Ultimate Infestation in hand, you can confidently spend all your cards, as you know that a refill is but one spell away.

You want as many of these as possible and keep all of them.

You want something from this list, in roughly this order.

Against slow decks, you look for ramp and Ultimate Infestation. Don’t worry about the cost, against a slow deck the game will not end before you can play it.

Most games you are just looking to ramp up in the early turns. If you are against aggro, then you are looking to remove minions with your early removal spells, Jade Golems, and Hero Power. 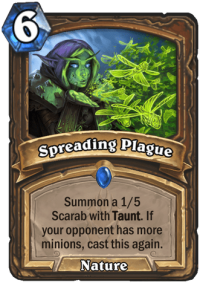 Your win condition is survival. Aggro deck is the beatdown, and you assume the control role, attempting to limit their board presence and prevent them from snowballing.

Ramp remains crucial, as the more mana you have at your disposal, the more you can do to stabilize: Spreading Plague may be a bit late on Turn six, but if you can drop it on Turn four in response to something like Call to Arms, it can shut down the aggression before things get out of hand. Use single-target removal liberally to prevent wide boards. Swipe takes a bit more thinking, as it is the only tool you have to contest wide boards from hand – once it’s gone, you have to build a board of your own to contest the opponent’s board.

Once you stabilize, you big minions can clean up anything the opponent can play and crush them.

You have two alternative win conditions: tempo enabled by ramp or infinite value from Jade Idols. Because control decks may run Skulking Geist – unless it’s a mirror – you should generally assume the beatdown role and use tempo to overpower the control deck.

Ramp up as fast as you can and play minions on the board. Be very aggressive – ask yourself what you are playing around for each trade you make. There are perfectly valid trades, for example to deny Warlock value from Carnivorous Cube and to set the health totals of minions so that the opponent’s area-of-effect damage spells harm the board as little as possible. Aim for a refill with Ultimate Infestation and keep up the assault.

The mirror match is somewhat different. Neither of you has good removal, and both of you can create some really big minions. Ramping up both your Jades and mana is the key there, and getting a turn with Fandral Staghelm and Jade Idol is the dream.

With Standard format card pool at its biggest right before the next rotation, there are many ways to build Jade Druid right now. 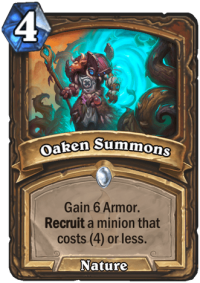 The Oaken Summons package is very popular because of its strength against aggro, but it is not the only way to build the deck. If you decide to ditch the package, you can choose to use cards such as Jade Spirit (for more natural Jade Golems and being less susceptible to Skulking Geist) and Mind Control Tech (great in the mirror).

Silence effects are highly valued in the current meta, and you can always fit in a Spellbreaker into Jade Druid as well. If you keep Oaken Summons, you will sometimes Recruit the Spellbreaker, but that is a risk many are willing to accept.

At one point, the main way for Jade Druid to contest aggressive decks was to use Spreading Plague together with Mark of the Lotus. The Oaken Summons package has overtaken this approach, but you can still go for it for some nice surprises. Add in Branching Paths, and your Taunt minions start to look very scary indeed.

Branching Paths can also serve you well without Mark of the Lotus. If you feel that you have enough time against the more aggressive decks you face, replacing Wrath with Branching Paths is a powerful improvement to some of the slower matchups.

Kun the Forgotten King is a great alternative to Medivh. It is a great way to reload after a potential board clear, or in some fringe cases can gain you health when you are in dire need. Kun into mana and then into Ultimate Infestation is a killer turn. It is higher tempo than Medivh, but ultimately lower value.

Jade Druid is not one of the most expensive decks, but there are some expensive cards in it that cannot effectively be replaced:

Many other legendary and epic cards can be replaced more easily, although replacing them of course weakens the deck: