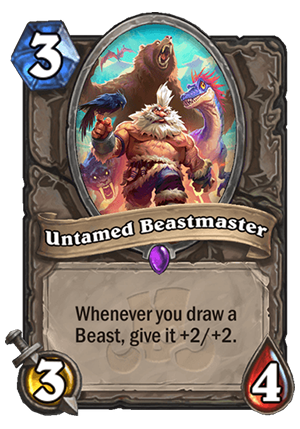 Vanilla statted minions with powerful effects are always something to watch out for, and this is no exception. 3/4 for 3 are about the best stats you can get without a downside, and it comes with a quite huge upside on top of that. But it also shares a similar theme with some of the other cards from this expansion – it’s strong, but it might not find the right deck.

Even though you need only a single +2/+2 buff to make it worth it, in order to make this card quite consistent, you need to play a deck packed with Beasts. And I mean packed – 10 to 15 Beasts seems like a good number. If you play less than that, you might drop it and then not draw anything even if it sticks to the board.

The deck it might fit into most is probably Quest Hunter. I know that it’s like beating a dead horse at this point, but that deck is literally packed with Beasts after you finish the Quest. Dropping this and following by a few copies of Carnassa’s Brood (which would get buffed and possibly draw another one to also get a buff) is a massive board swing. A bunch of 3/2’s might not be that scary, but a bunch of 5/4’s is. They’re also much harder to remove, since they don’t die to 2 and 3 damage AoEs (which are pretty common). Of course, it’s a card that makes Quest Hunter better AFTER it completes the Quest, and doesn’t really help with actually getting it done, so it probably won’t push it into viable territory.

Another deck I think about is some sort of Midrange Hunter – just a classic build with many Beasts and Beast synergies. It’s a solid 3-drop and a very high priority target. When dropped early, Aggro decks will treat it almost like it did have Taunt (because they don’t want you to snowball the game with huge Beasts) and slower decks will throw their premium removals just to get rid of it (which means that they might not have them for your another play, such as Houndmaster Shaw on T4). The problem with this kind of Hunter is that it doesn’t have a lot of things going in card draw department, so you would need to rely on topdecks to get value.

Yet another deck I could see using it is maybe some kind of Warlock. Either a Beast-heavy Zoo build (Zoo cycles a lot thanks to Hero Power and The Soularium), or maybe a Hir'eek, the Bat deck. Drawing it with this on the board would make it 3/3 immediately, so borderline playable. Still, since you can’t really control when you will draw it, it seems like too much of an RNG. But it’s a possibility.

Overall, it’s a very powerful card if it finds the right deck. But again, the problem is that it fits into very specific builds, and those builds might not be the best right now.