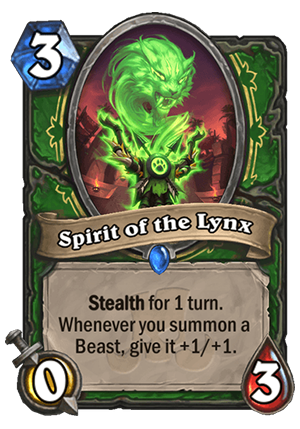 Spirit of the Lynx is a 3 Mana Cost Rare Hunter Minion card from the Rastakhan's Rumble set!

Much of this shrine’s power lies in the can-opener noise it makes.
Tweet

Spirit of the Lynx Card Review

If a card like that would stick to the board, it would be pretty powerful. However, the thing about those Spirit cards is that they need to get some value immediately, the turn they’re played, in order to be viable. This seems like a hard card to get value of immediately.

In order for your 3 mana minion to be worth it, I’d say that you need to get at least 3-4 buffs. Realistically, you can get that many activations with… Unleash the Hounds. Having 2/2’s instead of 1/1’s is quite good, I have to say. Not only it makes it easier to remove stuff, but if you’re going for an aggressive game plan, they can also deal a lot of damage. But what if you don’t have Unleash? You rarely play more than one, maybe two Beasts per turn. So even if you play this + a Beast on the first turn, and then two more Beasts on the second turn, that’s barely enough for it to be worth it. It would need to stick to the board for longer. Remember the older Druid card, Addled Grizzly? It was a bit similar – in theory, it sticking to the board gave you a massive advantage. But in practice, you could rarely play multiple minions per turn and it died quickly.

Another thing is that it’s another 3 mana card for Hunter. Hunter’s 3 mana slot is absolutely crowded, you REALLY have a lot of cards to pick from, but you can’t play that many of them. You can’t have half of your deck in the 3 mana slot, because your curve will be really messed up.