Our Budget Dude Paladin deck list guide for The Witchwood expansion will go through the ins-and-outs of this deck. This guide includes Mulligans, Gameplay Strategy, and Card Substitutions!

Dude Paladin has been a popular list in the Wild format for a while now. It has access to a lot of great stuff, but mainly the extremely good Muster for Battle. It didn’t become a thing in Standard until the release of Kobolds and Catacombs. Even after getting a bunch of good cards, it took a backseat to aggressive paladin lists being carried heavily on the back of Call to Arms and Corridor Creeper. After the big nerfs to Creeper and other cards, it was finally time for Dude Paladin to shine in the tail end of the Kobolds meta.

Dude Paladin was riding high heading into The Witchwood meta, but the list lost a few strong cards in Rallying Blade, Steward of Darkshire, and Stand Against Darkness. However, early on in the meta it seems that Paladin is going to be fine. Odd & Even versions are being played at a high level, and there’s even been sightings of Secret based versions using the new Bellringer Sentry. This budget version of Dude Paladin will lead quite nicely into either Odd or Even versions for the class. Even shares a lot more cards so it’d be cheaper to head in that direction, but the Odd version is much more popular and might be the safer route.

This budget version of Dude Paladin feels pretty solid, but you are missing some key epic cards to really make it sing. If you have any plans of playing Paladin in the future then do yourself a favor and craft Call to Arms as soon as possible. The card is crazy good, and is especially good in this style of deck. Level Up! is the other card you are missing and is less important, but gives you a lot more firepower in the late game. You are also missing a pretty important legendary in Sunkeeper Tarim, which is another key piece to the Paladin class and is a very safe craft.

Lost in the Jungle, Righteous Protector, Argent Squire, and Fire Fly are your main targets for your mulligan. You have a lot of 1-drops, so it’s going to be common to see these. You can keep Acherus Veteran if you get another 1-drop to play it with. Dire Wolf Alpha can be kept with a couple of 1-drops or Lost in the Jungle which has good synergy with it. Knife Juggler can be kept if you have a couple of 1-drops, but it’s better with the coin because you’d like to get at least one knife throw before it dies.

The strategy behind this deck is to try protect your board as much as possible. You are looking to either hit a big Lightfused Stegodon on your dudes, and/or use those dudes to decrease the cost of your Crystal Lion and cheat it out. 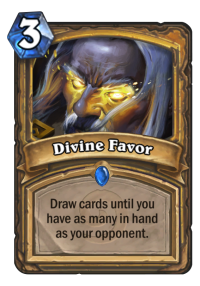 How you play this deck really depends on your hand. If you are sitting on a Divine Favor and you are against a slower deck then you should be flooding the board as much as possible and punishing them for holding a lot of cards or being unable to clear your board. If you don’t have Divine Favor, you will have to play a bit more conservatively because this deck doesn’t have anything else in the way of draw. Try to bait out AOE by adding just enough to the board to pose a threat, but not so much that you’ll have no plays. Use that hero power button as much as possible, especially when you are worried about a board clear on your opponent’s turn.

Cards with Silence are fairly popular right now, so be sure to trade Drygulch Jailor away as quickly as possible. If that gets silenced, you’ve played a 2-mana 1/1 that does nothing which is quite terrible. You really want those 1-cost Silver Hand Recruits to get buffed with your Stegodon or to get that Crystal Lion on the table for cheap.

Unidentified Maul can be very big in this deck, you have three options you are very happy to get: two recruits, +1 attack to the board, or your board gets divine shield. The fourth option (give your board taunt), is usually the weakest but can still be good in the right situation. If you do get this, consider whether or not you might want a minion you play to actually GET taunt. A minion like Knife Juggler is usually better off without taunt, so you might want to hold it back until after you play it.

Positioning is important in this deck due to Dire Wolf Alpha and Fungalmancer. A good rule of thumb is to put your larger minions on the left, while your minions from your hero power and/or spells will always be added on the right. You want to be able to potentially trade your cheap minions one after the other at times and this type of positioning allows for that.

Silver Sword gives you a late game option to help push to end the game. If you have it in your hand, make sure you plan your turn prior to playing it accordingly. You really want to hit that buff on some of your minions, so either hold back a bit if you expect AOE so you can play it all on the same turn, or load up your board in preparation for it.

What you want to craft in the future largely depends on what direction you want to take the deck. Odd Paladin is the more popular list right now, but Even Paladin also seems like a strong list. There’s still a lot of time for the meta to settle, so it is up to you to choose how you proceed!

I Want to Play… Odd Paladin!

Well, first thing you are going to need is Baku the Mooneater which is looking like a pretty strong card. This version also means that is the only real legendary you are going to need. Level Up! and Corridor Creeper are the epics you’ll likely need, but you can live without them early on. Witch's Cauldron is also seeing play in some versions, but I wouldn’t rush to throw that in the deck unless you got it in a pack.

I Want to Play… Even Paladin!

This version of Paladin is a lot more expensive and I would only really recommend it if you already had some of the legendaries it requires. You for sure need Sunkeeper Tarim, but Tirion Fordring would also be nice. Genn Greymane is also a must obviously, but you will also for sure need Call to Arms which is a big reason why you’d play this version over the odd one.