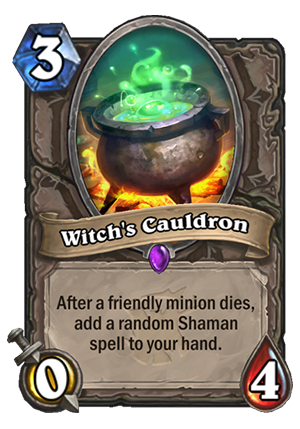 Witch’s Cauldron is a 3 Mana Cost Epic Neutral Minion card from the The Witchwood set!

After a friendly minion dies, add a random Shaman spell to your hand.

Eye of murloc, ear of bat, foot of Fordring, fur of cat…
Tweet

Sure? Random Shaman spells again? As much as it makes sense on a Hero card like Hagatha the Witch, I just can’t see it working too well on this one.

It’s pretty much unplayable by itself. 3 mana 0/4 is useless, it dies for free. You need to play it when you trade something. Realistically, most of the time, you will get like 1 or 2 random Shaman spells from it. Is it good enough? I honestly doubt it. Like I’ve mentioned when discussing Hagatha – there are lots of situational/bad Shaman spells and if you get only one or two, the chance to low-roll is quite significant.

Another thing I dislike about this card is that it doesn’t really fit anywhere. If you play a fast deck with lots of minions, most likely some sort of Token/Aggro deck, do you really want to play a 3 mana 0/4 or get a bunch of random Shaman spells? At the same time, if you play a slower deck that could actually benefit from it – you don’t really have lots of minions to trade in order to get value from it.

It reminds me of Cult Master, but Cult Master makes more sense, because fast decks prefer to draw cards from their deck instead of getting some random spells. 4/2 stats are also a better fit into an Aggro deck than 0/4, to be honest, even though the latter is harder to remove.

The card has a nice flavor, but I just can’t see it being too good. Maybe if we see some powerful Shaman spells this expansion that will make the pool this card draws from better.

Nope, the initial translation said “WHENEVER a friendly minion dies”, but the official one is “After” – definitely not proccing from itself.