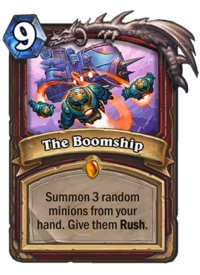 Since the addition of the Recruit keyword with the Kobolds and Catacombs expansion, Recruit Warrior has been not the best but still a very popular deck archetype among both casuals and pro players. The ability to cheat out high-mana threats early over and over again requires a very particular playstyle and creates a unique feeling of satisfaction.

By the looks of it, Team 5 wants to double-down on the fantasy behind Recruit Warrior with the release of Boomsday Project and gives it a few new toys to play with. The most important one is The Boomship, the Warrior’s new legendary spell, and boy, does it deserve that title!

The general win condition of this deck will most likely not change by a whole lot: Try to survive to get out your big guys and girls in the later stages of the game. The incredible Warrior board removal kit forms the backbone of this deck, and almost nothing changes in that regard. Almost nothing? Well, that’s not entirely true. The star of the Boomsday Project makes an appearance in this very deck list: Dr. Boom, Mad Genius will take us on a ride to Value Town, if we like it or not! And while his battlecry may not be particularly useful in the first place, it is the upgraded Hero power that makes this new Hero card an absolute staple in Recruit Warrior. 1 damage to all minions , three 1/1s with Rush, deal 3 damage, discover a Mech, gain 7 Armor; all those options sound like a spiritual song for every single control-heavy Warrior list.

Usual cards like Bring It On! and Dead Man's Hand up your fatigue game in the later stages, depending on the greediness within the meta (I’m looking at you, Mecha'thun!).

Another great value card that comes out straight of Dr. Boom’s laboratory is Omega Assembly. Recruit Warrior always has a problem to get on the board early, because it only plays expensive minions. Loads of removal can help, but it most certainly feels a lot more stable to discover a minion for your individual needs. Cards like Stonehill Defender show exactly that, and Omega Assembly fills that role. It can be played early to get a decent answer against aggro or mid range opponents, and the Omega portion of the card turns it into a legit late game threat, especially if Dr. Boom has already taken control. Three minions for one mana that don’t start in your deck. That’s just incredibly good.

A new addition to the deck that has been printed in an earlier set is Charged Devilsaur. This little dino has seen regular play in Cube-centric Recruit archetypes like Recruit Hunter. Thanks to its weird card text combination, this beauty turns into a 7-damage charge minion if recruited out of your deck.

So why would we run two of these in Recruit Warrior? First of all, the minion by itself is not as bad as it seems. If being played from hand it provides great value and almost always trades 2 for 1. A more realistic scenario would be a recruit with Gather Your Party or Woecleaver and a 8 mana card for either one weapon swing or a 6-mana spell.

The true dream combo that involves Charged Devilsaur however is initiated by the Warrior’s new legendary spell, The Boomship. One of Recruit Warrior’s greatest weaknesses was the fact that if you had drawn all your high-mana threats early, there were no minions to recruit from your deck afterwards. The Boomship is able to turn this weakness into a swing turn that this deck couldn’t create before! The fact that the minions released from your deadly ship get the rush keyword makes this even better against heavy late game boards from archetypes like Taunt Druid.

Looking at the cards revealed so far, the meta could stay very control-focussed, and Recruit Warrior wants to play in that very meta game. Players like Fibonacci showed what Recruit Warrior is capable of, and both The Boomship and Omega Assembly add more options to a deck that relied heavily on decent draws.  On top of that, Dr. Boom, Mad Genius will dominate the late value game and could catapult Boomsday Project’s Recruit Warrior to new tier list heights!