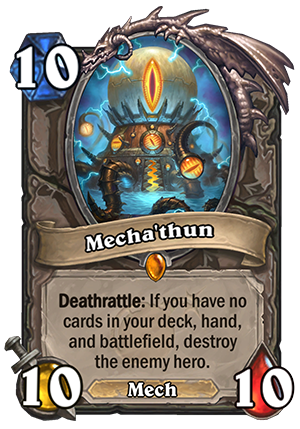 Mecha’thun is a 10 Mana Cost Legendary Neutral Minion Mech card from the The Boomsday Project set!

Deathrattle: If you have no cards in your deck, hand, and battlefield, destroy the enemy hero.

"Your software will fail. Your users will abandon you. You are already obsolete."
Tweet

Boomsday Project is an expansion full of experimental, crazy cards, and this card is like the essence of an entire expansion. It’s insane. And I love it.

I honestly don’t think that it’s a good card at all, but it’s one of the most fun from the entire expansion. It will lead to hundreds of different theorycrafts, ways to make it work. Most likely none of them will really work, or at the very least none of them will work consistently and be better than already existing deck lists. The requirement to have nothing, literally NOTHING in your hand, board, deck etc. is already huge, but it gets even better. Since this is a Deathrattle, it’s vulnerable to any kind of Silence or Transform effects. Which means that you have ot trigger it right away yourself too. There aren’t many ways to do it. For example, Druid can play this + Innervate + Naturalize. But it means that every single card was already drawn, no other minions are present on the field etc. You often need to plan for it multiple turns ahead. Like, if your opponent realizes what kind of deck you play, and you drop Spreading Plague, he might leave you with a single 1/5 Taunt and ignore it for the rest of the game, so you can never proc Mecha’thun.

Of course, since you play a combo that literally requires you to draw and play every single card in your deck, playing a regular combo seems better. The main downside of combo deck is that you might not have time to find/play your combo before you die. This card, while consistent, is literally the slowest combo you can have in the entire game. Most of the other combos are drawn and played with a few cards still left in your deck, few dead cards in your hand etc. This one literally can’t.

The closest “trigger” card for this we have right now is Cataclysm in slow Warlock – it might be an extra win condition once you enter fatigue, but those are still two dead cards in your hand, work only after you reach fatigue AND require this guy to stick for a turn. Otherwise opponent just Silences or straight up kills it while you still have cards in your hand and that’s the end of your combo. So yeah, it won’t work.

It is an absolutely terrible card, but at the same time one of the most fun and unique from the entire expansion. It won’t work in Standard, I’m pretty much sure of that. Maybe in Wild, especially many expansions from now, there will be some crazy ways to get rid of everything on the board, as well as in your hand/deck and it will be viable.