Learn how to play this archetype with our Big Spell Mage Deck List Guide.

Our Big Spell Mage deck list guide is fully updated for the post-nerfs February 2018 meta of the Kobolds and Catacombs expansion! This guide will teach you how to mulligan, pilot, and substitute cards for this archetype!

Big Spell Mage is the spiritual successor to Control Mage. It is one of the purest control decks in Kobolds and Catacombs: seeking to remove the opponent’s threats throughout most of the game and then finally pushing forward with some big finishers. The central card of the archetype is Dragon's Fury, a powerful area-of-effect damage spell that is only effective when the deck is built around expensive spells. Early versions of Big Spell Mage experimented with tempo-based plays with Spiteful Summoner, but Dragon’s Fury directs the deck more towards pure control play. Currently, Big Spell Mage decks range from control decks with a number of powerful late-game win conditions to almost pure fatigue builds, sometimes even including N'Zoth, The Corruptor. This guide is written from the perspective of a control build, not a fatigue build.

Building a Big Spell Mage deck is a delicate exercise. As a control deck, it is highly reliant on the meta that surrounds it, and it needs to adapt to whatever is prevalent in order to have the right answers. For this reason, I expect some changes to be necessary even after a brief period of time. In this section, I strive to explain the card choices in the sample list and what you may need to do to adapt to the meta you are facing.

As a control deck, Big Spell Mage is in large part defined by its removal package. Most of the removal in the deck is damage-based, and may need to vary depending on the meta. 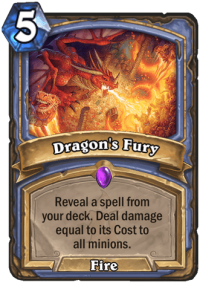 In addition to removal, a control deck needs some solid card draw. Big Spell Mage uses less card draw than many other control decks, but it would not find the right answers without any.

Control decks also need some healing. Big Spell Mage has Frost Lich Jaina and Alexstrasza that are also win conditions, and it also has Arcane Artificer. Arcane Artificer is not a one-drop! You never keep it in the mulligan or play it on turn one, it is a comeback tool best combined with area-of-effect damage spells for healing while clearing up the board. It can do a lot of work with Blizzard, especially if the opponent cannot then remove the Artificer and it lives to provide more armor next turn.

What about those win conditions? Big Spell Mage has several.

The remaining cards in Big Spell Mage are for defense, swings, and disruption. Hearthstone provides limited ways to disrupt your opponent’s plays, but Big Spell Mage makes use of what tools there are.

Your priority is survival and heavy emphasis is placed on early defensive cards.

Early survival is not that much of an issue against slow decks. However, you need to find answers specific to your opponent and can afford to keep some of them in the mulligan. 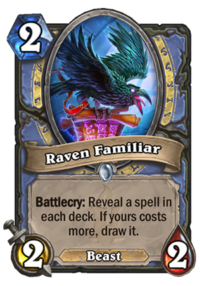 Your plan against fast decks is going to be the same across all classes: clear the board. Decks like Zoo, Hunter, Tempo Rogue, and Paladin make a living off of strong early game and powerful minion interactions. Your goal to combat that should be to do everything in your power to never let them go too wide. A turn two Doomsayer is a great way to make that happen, but your endless removal does the trick as well. These are games where you need to find a balance between proactive and reactive plays. You want to get the most value out of your big clears, but you also don’t want to wait too long and fall into burst range. Every single aggro deck these days runs a wide range of fast damage, and they will kill you with it if you take too long to get on top of their boards. Always calculate your opponent’s damage potential and then adapt accordingly.

On that note, healing is extremely important in these games. You have access to both Arcane Artificer and Frost Lich Jaina, and you need to try to use both when possible. Frost Lich Jaina can often close out games against aggressive decks, but it can be difficult to find the time to play her, and you cannot afford to keep her in the mulligan, as you may not find enough early answers if you do. A board clear followed by Doomsayer is often your best chance to get enough breathing room to secure a Jaina turn. Arcane Artificer works well with all of your board clears, and can also sometimes provide enough Armor to secure a safe Jaina turn.

I should also mention that Secret Mage is always going to be a rough battle for this build. Counterspell hits you extremely hard, and there is no real way to play around that unless you’re on the Coin, which you should save for Counterspell. You often need to have your early minions if you’re going to have a chance. If you do make it to the later turns of the game, you should prioritize healing over everything else. 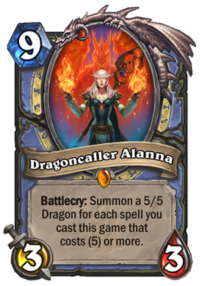 When going up against slower decks, you typically want to lean on your finishers. This deck packs the big three of Medivh, the Guardian, Frost Lich Jaina, and Dragoncaller Alanna. All of those cards do a lot of work, especially when you’re trying to slowly grind your opponent down to dust. In every game, if you have the option of become Frost Lich Jaina, you should. The Death Knight is the best control tool in the game right now and will allow you to create a constant stream of threats for your opponent to answer.

The hardest part of going long is deciding when to drop Dragoncaller Alanna. Your opponent will often try to save a board clear to respond to Alanna, and if you can force them to use it, Alanna can win the game. On the other hand, sometimes you want to play Alanna to force the opponent to use that board clear instead of doing something proactive.

Remember, this is a deck that is going to slowly break people down. You are taking things slow, which means that against control builds you need to take things even slower. Awareness of your opponent’s resources is the key to victory. For example, against Control Warlock with Rin, the First Disciple, Rin is your primary Polymorph target, not Voidlord. However, this changes in the very late game, when the Seals no longer make a difference in fatigue – then you can safely use Polymorph on other targets. 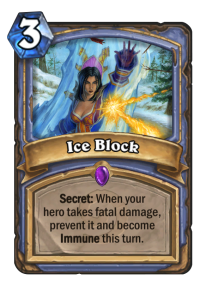 There is one glaring omission in the sample list on this guide: there are no Secrets! The history of the Secret package in Big Spell Mage is an interesting one, and understanding it can help you decide whether you want to include some kind of Secret package into your deck. The very first builds at the start of Kobolds and Catacombs ran no Secrets. They were crushed by Highlander Priest’s one-turn-kill Velen combos, and soon Secrets were introduced into the build, often in the form of two copies of each Arcanologist, Ice Block, and Medivh's Valet.

As time went by, Medivh’s Valet was more commonly dropped from the build, and eventually Arcanologist was more often cut down to just a single copy – while it resembles an early-game card, it is more of an answer to combo decks in Big Spell Mage, and you do not have to find it early to succeed. Eventually, even Ice Block itself was sometimes cut down to a single copy – just enough to survive a single lethal blow from a combo deck, or sometimes from an aggro deck that you can then stabilize against with a board clear and Arcane Artificer.

Another factor that affects the usefulness of Secrets is anti-Secret tech. Eater of Secrets has been a rare sight in general, but in the early post-nerfs meta, its use increased sevenfold as other decks responded to the prevalence of Secret Mage and Spell Hunter. If anti-Secret tech is common, Secrets are less useful.

In conclusion, Ice Block is needed if combo decks are very common – you need to survive the combo and then heal up afterwards. It can also help against aggressive decks, but without combo decks to worry about, it becomes a more difficult call whether to include it or not. If you choose to go with Secrets, the most common builds use one Arcanologist and either one or two copies of Ice Block.

As the Secret package introduces more cheap cards into the deck, you may want to look into Acolyte of Pain or Coldlight Oracle for card draw instead of Bright-Eyed Scout should you go that way.

The three main card draw options, Bright-Eyed Scout, Acolyte of Pain, and Coldlight Oracle each have their upsides and downsides.

There are several tech cards in the list. Dirty Rat, Skulking Geist, and even Tar Creeper are all heavily meta-dependent choices. One of the most glaring omissions in the sample list is lack of weapon removal. Acidic Swamp Ooze is sometimes used for the purpose, often in place of Dirty Rat. With the Pirate nerfs, the days of Golakka Crawler in the deck seem to be over, but should Pirates experience a resurgence, it remains an option. Twilight Flamecaller is another card that can help in an aggressive meta, as long as the aggro decks run many one-health minions: it is good against Aggro Paladin, for example, but much less so against Murloc Paladin. If you find yourself needing some additional reach, you can also consider Pyroblast – I have enjoyed the surprise lethals with the card, but it is next to useless against aggro.

Big Spell Mage is not a budget deck. No matter how you look at it, it cannot be done on a budget, because you need powerful win conditions and you also need a bunch of removal cards, many of which are of Epic rarity.

Other than those, you can do some replacements.