This Aggro Pirate Warrior deck list guide for the Kobolds and Catacombs expansion will teach you how to play this extremely fast paced Warrior deck. It uses aggressive Pirate minions with Weapons and Weapon synergy to generate a lot of early game pressure to defeat your potion. Our Aggro Pirate Warrior guide includes Mulligans, Gameplay Strategy, Card Substitutions, and Combos/Synergies!

Pirate Warrior is very controversial because it has the ability to kill opponent’s very quickly and many view unfairly. This deck, however, can run out of steam  and can be hurt with tech cards such as Golakka Crawler and Weapon removal like Acidic Swamp Ooze, Gluttonous Ooze, or Harrison Jones. One of the big weaknesses of this deck is that it contains no card draw, so if it draws a slow hand or a handful of weapons it can just lose on the spot.

The deck took a pretty big hit with the nerf to Fiery War Axe, but Prince Keleseth seemed to soften the blow. Pirate Warrior isn’t as strong as it once was, but with the addition of some new tools in Kobolds and Catacombs it might be in a better spot than it was in the Frozen Throne meta.

Check out our Budget Version of Aggro Pirate Warrior!

Warrior didn’t get anything too great for Pirate Warrior in the Kobolds expansion. However, it did get Lesser Mithril Spellstone which looks kind of like an odd addition, but when paired with Spiteful Summoner makes for a pretty big mid-to-late game board swing. As most aggressive decks have done, it also includes Corridor Creeper which rewards aggressive lists for trading early and allowing them to accelerate a higher stat minion to the board.

It might finally be the nail in the coffin for Pirate Warrior in Standard. Patches and Corridor Creeper are both being nerfed. Creeper looks to be totally dead, but Patches could still see play in full Pirate based decks. Pirate Warrior might be finally relegated to Wild.

First, don’t just throw a minion down on your first turn and immediately pass the turn. I can’t tell you how often I would absentmindedly do this while Patches the Pirate would be shot out of a cannon and make me feel like a fool. This is an aggressive deck, but it doesn’t mean you have to play every card at lightning speed! Another card that tripped me up in the beginning was Bloodsail Cultist. For some reason I thought it buffed a weapon if you had a weapon equipped, unfortunately for me it requires that you have a Pirate on the board. Hopefully these couples of tips will save you some of the embarrassment I originally went through.

Why is Patches the Pirate Good? 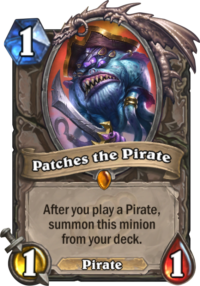 I see this question a lot so I’d like to address it. Patches is a minion that lands on your board for free the majority of the time unless you get him in your first draw or mulligan. Think of it as starting the game off with a 1/1 minion already on the board, and a deck that has 29 cards in it. A thinner deck enables you to draw more reliably. Also, starting off with a 1/1 minion on your board for free gives you a pretty nice advantage. Patches is also a Pirate, which in a Pirate synergistic deck means you’ll be able to enable cards like Bloodsail Cultist more easily on curve.

Think about this first turn on The Coin: N'Zoth's First Mate, The Coin, Patches hits the board, you play Southsea Deckhand. You get a 1/3 Weapon, two 1/1s, and a 2/1 on turn one. That’s a pretty crazy first turn and is difficult for your opponent to deal with.

Without Fiery War Axe you are looking for cheap minions to populate your hand. Fire Fly, N'Zoth's First Mate, and sometimes Southsea Deckhand (with support). However, the key now is Prince Keleseth. If you start with him in your hand your winrate increases significantly! Always be mulliganing hard for the Prince and only really look to keep Fire Fly & N’Zoth’s First Mate which are very good openers. If you have a 1-drop and especially if it’s a Pirate, then you keep Corridor Creeper! I know it sounds crazy to keep a 7-cost minion, but just trading a few minions brings it down to a 4-cost card, and by turn 3 it could be even lower. You will often be able to get Corridor Creeper down to 0-mana by turn 4 which gives you a huge tempo swing.

You can potentially keep a 3-drop like Bloodsail Cultist, Frothing Berserker, or Southsea Captain if you have Keleseth already.

Pressure and damage to the face is the name of the game with this very aggressive deck. Now, that doesn’t mean you should send every Weapon charge to the face, in fact the Weapons are normally better used for keeping their board relatively clean while your fragile minions continue to punish your opponent. You want consistent and repetitive damage with your minions, but trading away a couple 1/1s to preserve a larger minion on your board is usually the correct play.

Using your Weapon charges also greatly depends on what you have in your hand. If your hand is clogged with Weapons then you should be more readily using up the charges. This is especially the case with N’Zoth’s First Mate’s weapon, you are going to have stronger weapons to get to in the later game so it can be best to use it up while you can.

In Aggro matchups, you want to make trades as efficiently as possible so you are dictating the terms. You’ll only go hard to the face when you make your final push for lethal. Aggro decks have a hard time coming back into the game. In the Pirate Warrior mirror, they won’t be able to draw into many cards. In these Aggro matches, you can pretty much flood the board as quickly as possible because there’s rarely any AOE issues (unless it’s Shaman with Maelstrom Portal).

This deck gets a whole lot better against aggressive matchups if you are able to play Prince Keleseth. The +1/+1 stats give you a big advantage and this alone can often determine the game. 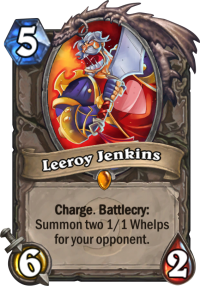 Control matchups are the times where you can’t really afford to make trades. You need to pressure them and force them to keep playing on the back foot. If they are able to eliminate your early threats you’ll have a hard time coming back in the game unless you find yourself able to build up a large damage combo with stuff like Leeroy Jenkins.

Corridor Creeper is the new kid on the block, and a lot has already been said about it in the community. It’s an insane card, and it’s even better when used in a deck that has Patches the Pirate in it. You are often trading your minions back and forth in the early game, so Corridor Creeper’s cost is reduced immediately. On turn 2 if you and your opponent both played a card and have Patches on the board then Creeper is already going to be down to 3-mana with those trades. So you could see a scenario where the costs 1 or 0-mana on turn 3!

The kind of odd addition to Pirate Warrior is the Spiteful Summoner & Lesser Mithril Spellstone combination. You basically don’t ever want to draw the spellstone and instead are hoping to get a good outcome from Spiteful Summoner, but you don’t really want to draw her until late in the game. These two cards do help give you some late game firepower, but if you draw them early they are going to be pretty dead in your hand.

Aggro decks test your ability to understand how to play your hand. You’ll have to learn how to judge when it’s time to go all-in, and when you should trade. If you are against the ropes, then it’s best to just throw it all on the board and see if they can answer it. If they have the answers, well you were probably going to lose anyway. On the other hand, you’ll win some games you had no business winning because they didn’t have the cards to stop you.

These are cards that go in and out of the deck and can also be used to replace cards you might not have.

That first turn N'Zoth's First Mate, Patches the Pirate, The Coin, with Southsea Deckhand is an awesome combo that gives you an impressive board state.

All of these cheap minions synergize well with Corridor Creeper. Try to get it to 0-mana so you can play it on the same turn as another minion for maximum tempo swing.

If you have Prince Keleseth in your hand, you might not want to play a Pirate immediately so you can buff your Patches and get a 2/2 charger on the board for free. This can be the case if you went second and your opponent plays a minion that will just easily kill Patches.