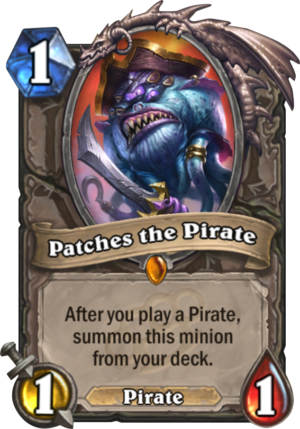 Patches the Pirate is a 1 Mana Cost Legendary Neutral Minion Pirate card from the Mean Streets of Gadgetzan set!

After you play a Pirate, summon this minion from your deck.

What do sailors yell when Patches steals their treasure chest full of laws and other things being transported to parliament for a vote? "The Eyes have it!"
Tweet

Ever since its reveal on November 4th 2016, Patches the Pirate has been one of Hearthstone’s most controversial cards, loved by many and hated by at least as many. This is mostly due to the fact that this initially unassuming 1-cost 1/1 is one of the game’s most powerful and impactful cards. Its Charge ability makes it extremely valuable to aggressive decks, which the Pirate tribe already naturally favors. It turns every other Pirate in your deck into a tutoring card without any drawback AND it does so for free. In any card game, tutoring for specific cards and cheating the resource system are some of the most powerful or downright broken things you can be doing, Hearthstone being no exception to this rule.

All of the mechanics on this card interact with one another to produce a borderline overpowered minion that has dominated the early game since its introduction. Patches the Pirate allows aggressive decks to go wide onto the board from the very first turn. By adding not only more stats, but also spreading them out over more bodies, this makes dealing with the threat that much more difficult for the opponent. Adding the immediate impact of Charge on top of all that is just icing on an already sweet cake. Patches has seen play in all sorts of decks and quite literally every bit of text on that card has made it relevant in different ways, which speaks volumes for this unique design. Every class and deck being able to play pirates does so, from the aggressive Pirate Warrior, to Token Druid which appreciates having extra bodies to buff, to the classic Miracle Rogue which even uses Patches the Pirate DEFENSIVELY to fend off opponent’s early game threats. The one redeeming quality of this card is that although it’s oppressive in the early turns, it scales very poorly with time as the game progresses and the 1/1 (or sometimes slightly larger) body starts to become less relevant.

Everything started before Patches was even released, in the Karazhan era. Although that period is commonly referred to as “Shamanstone”, there were a decent number of competitive decks. Among the best – Dragon Warrior. This was a fairly aggressive midrange deck that scaled relatively well into the late-game, utilizing very powerful charge minions (such as Alexstrasza's Champion, Kor'kron Elite) and the best Warrior weapons (pre-nerf Fiery War Axe, Death's Bite) to dominate the early game and solid threats (Drakonid Crusher) to close out the game in case it wasn’t already over. (As a fun side note, this was also the last competitive deck to utilize King Mukla). At the end of the Kharazhan era, however, there were already Dragon Warrior decks that wanted to be more aggressive by including Pirates for extra early game due to weapon synergies and in fact, however fringe, there were actual Pirate Warrior decks that were based on winning the board early and going face with Upgrade!ed weapons to finish off the enemy.

So you can imagine that when Mean Streets of Gadgetzan came out, Pirate Warrior quickly became one of the best decks. Patches the Pirate and Small-Time Buccaneer (had 2 health back then) helped carry the archetype, as well as another aggressive Pirate class – Rogue, which would enable Buccaneer by simply using their hero power. Buccaneer was eventually nerfed by being made vulnerable to pings, Maelstrom Portal and most importantly, opposing Patches. This helped tone down Pirate Warrior and it was now only one of the best decks in the meta-game, as well as pretty much killed Pirate Rogue. Eventually, Reno decks were worked on and refined, given a big boost by Kazakus and the Kabal classes’ unique highlander legendaries, to the point where they could also compete, turning the meta into a Patches vs Reno standoff.

Eventually the Year of the Mammoth came around and brought a significant shift in the meta, with many cards leaving Standard (most notably Reno Jackson), however Pirate Warrior prevailed. At this time, Patches the Pirate, which was already adopted by Miracle Rogue as a defensive tool to help combat opposing Patches decks, found its way into another dominant archetype, Token Druid, as well as being crucial for the early game dominance of Water Rogue. After that point, Patches solidified its spot as a staple card in pretty much any deck looking to be aggressive and it will remain such until Standard rotates out of the Year of the Mammoth and Mean Streets of Gadgetzan goes away. The last new home Patches found was Knights of the Frozen Throne’s late bloomer Keleseth Rogue, which is the deck that perhaps best showcases the true potential power of Patches the Pirate, often pulling out a charging 3/3 or 4/4 directly onto the board for no cost.

Pirate Warrior in particular has proven hard to keep down in any meta and has in fact reigned over most of them, a real testament to the power of a 1-cost 1/1 minion. 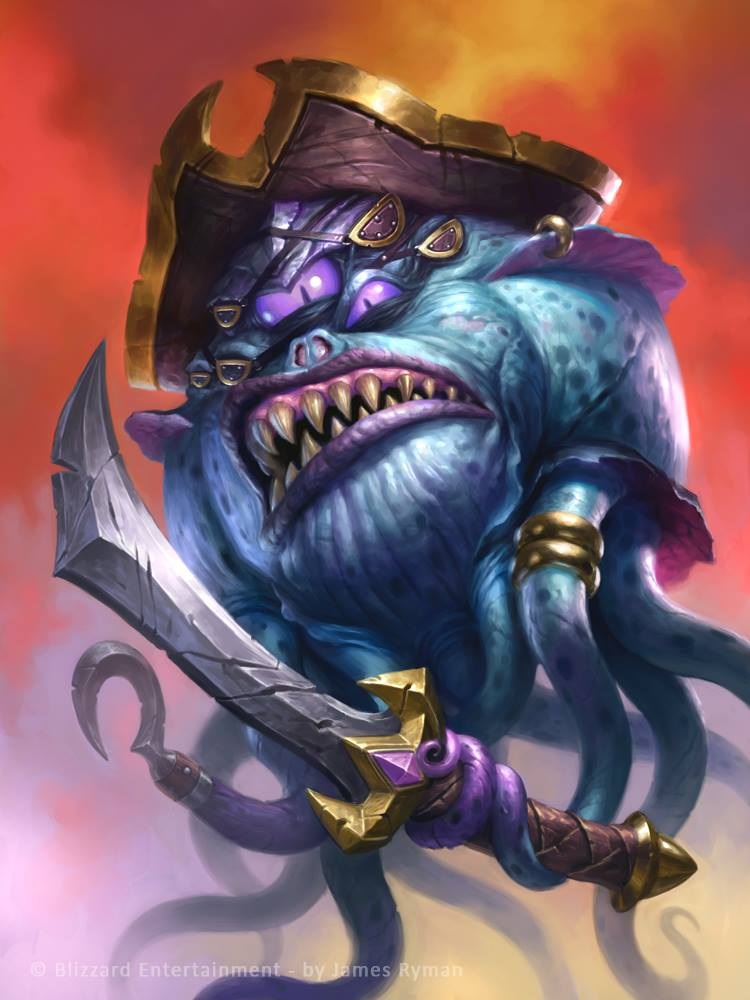