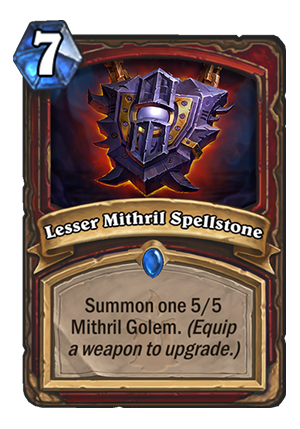 Summon one 5/5 Mithril Golem. (Equip a weapon to upgrade.)

To dwarves of stone the demon called
With promises of might, enthralled
In grasping greed they found their doom
Forever bound in mithril tombs.
Tweet

We already saw the Shaman spellstone last week and looking at this, you sort of immediately draw a parallel to it. For 7 mana you get to summon a pile of stats… however, typically, a vanilla creature that is simply Power/Toughness is not worth playing. Yes, eventually you will be able to summon a total of 15/15 worth of stats spread across three bodies for 7 mana. At first glance that seems really good, but… is it really? Sometimes it will be enough to break the opponent who has either run out of removal or simply cannot contest the sheer bulk of your minions, but often times you can do much crazier things for the effort you put into upgrading and playing the Spellstone. Keep in mind that typically, Warrior decks play no more than 4 weapons and even with our preview card from KTF, Forge of Souls, it’s going to take a lot of patient setup to upgrade. Weapons tend to be really good as early as possible, meaning you will most often want to play them in the early game, when theoretically you don’t want to have Mithril Spellstone in hand. If you keep it, then for the first 7 turns of the game you are playing with 1 card less than the opponent, whereas if you toss it back, you might not draw it in time to see you play the weapon. It is a lose-lose situation most of the time you try to go for a big Spellstone, which in the end won’t even be a good play if you are under pressure. Though, to be fair, it is an excellent play if you aren’t.

There is one really exciting possibility, though, which must not be overlooked. With Dead Man's Hand you can shuffle the Greater Mithril Spellstone into your deck and start generating infinite threats that way, while also being able to play another card alongside it, for instance a Shield Block, Bring It On! or something along those lines. Whether or not that’s optimal remains to be seen, but it’s not very likely, given that current builds of Dead Man's Hand decks want to simply outlast you without worrying too much about generating threats.