Our No Minion Spell Mage deck list guide goes through the ins-and-outs of this Mage deck that has been meta-defining in Forged in the Barrens! This guide will teach you how to mulligan, pilot, and substitute cards for this archetype!

Introduction to No Minion Spell Mage 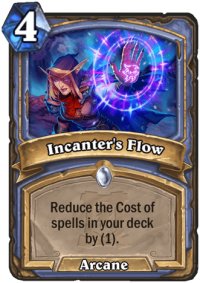 Spell Mage, or No Minion Mage as it is sometimes called, is a Mage deck archetype that was born during the Ashes of Outland expansion in 2020 with the release of Incanter's Flow, Font of Power, and Apexis Blast, a trio of cards that encouraged Mage players to build decks that consist of spells only.

Spell Mage saw varying levels of success during 2020, and really hit the jackpot with the Standard rotation of 2021: As many decks lost powerful cards, Spell Mage got to keep all of its main power pieces and received Refreshing Spring Water from Forged in the Barrens.

Furthermore, the smaller spell pool and lower power level of a fresh post-rotation meta allowed Deck of Lunacy to shine. Suddenly, Spell Mage could pursue its usual burn plan, or simply change the entire deck to a number of extremely powerful and cheap spells. Spell Mage rapidly became the most popular deck in the game, and games were fun and interactive, but only for the Spell Mage player. Deck of Lunacy was soon nerfed from two mana to four mana, and the madness subsided.

Check out alternative versions of this deck on our Spell Mage archetype page! 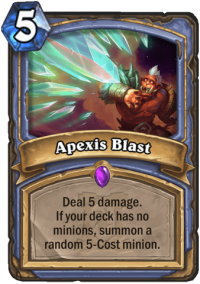 At its core, Spell Mage is a slow burn deck. You have a wide variety of direct-damage spells that you can use to reduce your opponent’s health total to zero: Runed Orb, Fireball, Apexis Blast, and Mask of C'Thun can all deal direct damage.

You support this damage-dealing capability with minions from Font of Power and Primordial Studies, as well as from the minions summoned by Apexis Blast. Any damage these minions can deal is an upside, and Spell Damage minions can help you deal even more damage with your direct-damage spells.

Try to use Runed Orb and Apexis Blast early because they give you more resources to play around with, and try to clear the board as well as possible before using Mask of C'Thun.

Discounts from Incanter's Flow and Primordial Studies can enable you to do many things at once in the late-game, so you may be able to play a Spell Damage minion, clear the board, and use multiple direct-damage spells all at once. A well-timed Imprisoned Phoenix, if you manage to Discover one, can give your damage spells a major boost. If you happen to discover Astromancer Solarian, note that a Solarian Prime in your deck will disable the additional benefits from Font of Power and Apexis Blast. 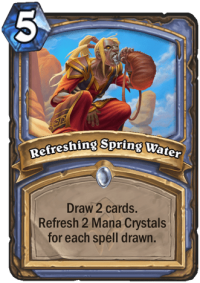 Devolving Missiles is your key tool to fight against buffs, and it can make Paladin Librams disappear instead of returning to the hand.

The rest of your deck is card draw and defensive tools. When fighting against the opponent’s minions, try to use Brain Freeze, Combustion, and Flamestrike, because they cannot hit face, but be ready to use some of your direct-damage spells too as needed: the ability to deal damage does you no good if you’re dead. 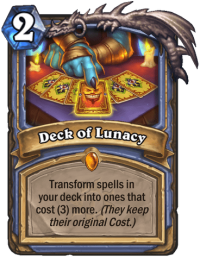 If you want to play with Deck of Lunacy, all you need to do is include it instead of let’s say Netherwind Portal. If you do it, things are quite different. At four mana, you generally cannot use Deck of Lunacy against aggro decks anymore, because you do not have enough time to make use of your powerful spells unless you have had a phenomenal opener and have defended everything perfectly. Against slower decks, however, it can still provide a lot of pressure.

As Spell Mage, your worst nightmare is Hunter. Hunter is fast at dealing damage, and any small minions you have on the board turn into liabilities because of Trampling Rhino and Piercing Shot. You need to able to handle their early board quickly with Brain Freeze, Runed Orb, and Combustion, and hopefully start turning the tide with Apexis Blast followed by Ring Toss for defensive Secrets, but the matchup is really difficult no matter what.

The same general approach works against other aggro decks too: defend, get defensive Secrets, and start blasting their face to win.

Against control decks, you are the beatdown. You are the one who has the initiative and who applies pressure, attempting to make the control deck crumble.

Get minions on the board as soon as possible and try to deal damage with them whenever you can. Use Runed Orb and Apexis Blast early to get additional resources from them. Try to set up big damage turns with Spell Damage minions, Fireballs, and Mask of C'Thun.

If you are using Deck of Lunacy, try to use it as soon as possible and use minion pressure to run the control deck out of resources.

Spell Mage is a fairly affordable deck: You can use Deck of Lunacy if you like, but it is by no means mandatory. Likewise, some decks use C'thun, the Shattered or Evocation, but they are not mandatory either (statistics show mixed results of those two, but they certainly help in some matchups).