Rise of Shadows is about to change our perception of Druid’s survivability tools. Whereas in Rastakhan’s Rumble, Druid was known for its near-endless armor gain that even rivaled that of Warrior, Rise of Shadows is moving Druid away from armor and towards health restoration. As part of this new move, we are also getting some powerful heal synergy cards: Lucentbark and Crystal Stag. An infinitely recurring big Taunt minion in the late game and a pair of 4/4 Rush minions on turn five are certainly interesting cards, but can a deck be built around them?

My initial estimate of Heal Druid is that it’s cute rather than powerful, but there are lots of interesting synergies available for the archetype, and if the right mix can be found, it may find success. Here’s my first take on the archetype: 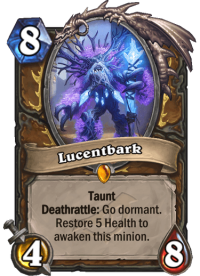 Lucentbark is obviously the central piece of the deck. However, it is a Legendary card, so the first question is how to find it: if it sits at the bottom of the deck, that is bad news for a non-combo deck that really does not want to go all the way to fatigue. Luckily, we have cards that can tutor Lucentbark from the deck: Juicy Psychmelon (Lucentbark is the only eight-drop in this list) and Countess Ashmore (Lucentbark is the only Deathrattle minion in this list). This means that we only need to draw one of the three cards to gain access to our build-around card. I like those odds a lot more.

The second question is how can we make more copies of Lucentbark: an army of 4/8 Taunt minions that keep coming back is much better than just one. The main tool here is Flobbidinous Floop: even if Lucentbark gets silenced or transformed, we can still recover as long as we have had Floop in hand when Lucentbark was played. In addition to Floop, the deck sports a pair of Faceless Manipulators, ready to become Lucentbarks, or even something powerful from the opponent if needed. Lucentbark on turn eight followed by Flobbidinous Floop and Faceless Manipulator on turn nine is the ultimate power move of the deck. 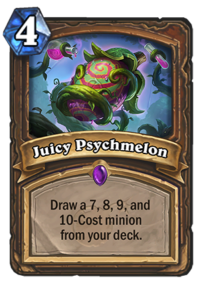 There can be other options too. In order to make Juicy Psychmelon a reliable tutor for Lucentbark, I opted to skip Gloop Sprayer and Da Undatakah, but those remain potential options. Furthermore, silence effects could potentially be dealt with by using Youthful Brewmaster or Baleful Banker. There are several ways to build the copy package.

Finally, Lucentbark needs to be revived consistently. For this purpose, the deck needs healing, and I have included the most obvious choices: Crystal Power (together with Keeper Stalladris, so it can even be played twice!) and Ancient of Lore – both cards restore exactly enough health to revive Lucentbark, which makes them great options. Throw in a Crystallizer, and you can take some damage if you would otherwise have none to heal.

There are also other Lifesteal synergies with Dreamway Guardians, Pumpkin Peasant, and Zilliax providing smaller amounts of health gain. These can serve to revive Lucentbark, but also to activate the Battlecry effect of Crystal Stag over multiple turns all the while providing some random Druid spells from Lifeweaver. 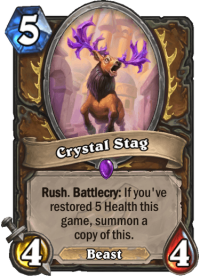 As another cute little synergy, I have included one copy of Predatory Instincts in the deck: it will draw either a 4/8 Crystal Stag or a 3/24 Witchwood Grizzly – and if played on turn four, it will allow you to play them on curve on turn five.

There are several ways to make use of Keeper Stalladris: Crystal Power, Wrath, and Mark of Nature can all benefit from the Keeper’s ability. These can help you with more access to healing, card draw, and Taunt minions.

Overall, Heal Druid can be built with tons of synergies. Almost all the cards in the deck make each other stronger and there are lots of decisions to make on how to make the most out of the opportunities opened by the cards. This is the beauty of the archetype, but it can also be its downfall: when have cute synergies been able to overcome strong on-curve plays in Hearthstone? Whether they succeed or not, all of these small synergies and various plays they open up look like a lot of fun.