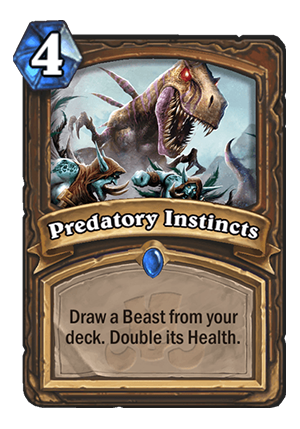 Draw a Beast from your deck and double its Health.

4 mana to draw a single card? Well, I do get that it tutors AND doubles the health of that card, but still, it seems like too much. The only real use I can see for it is a guaranteed tutor for Hadronox in Taunt Druid – you lose a lot of games in which you get it too late vs slower decks. Doubling the health part would be irrelevant, though, sometimes even negative (if you want to kill it but don’t have Naturalize), so I don’t know if it would fit in there, especially since it would be a dead card in case you do draw Hadronox (you play no other Beasts after all).

Another option would obviously be Big Beast Druid. Here doubling the health would be relevant, but it doesn’t change the fact that this card is terribly slow. You pay 4 mana to cycle a card, that’s A LOT. That said, hitting e.g. Witchwood Grizzly might be amazing in some matchups – you could consistently pull off 3/18 Taunts for example. Doubling the health of Oondasta is also a nice deal, since you would have more opportunities to trigger the Overkill effect.

In the end, I think that this card would be too slow. Might be used in some Combo decks to pull a specific Beast (like Hadronox case), but not much more than that.