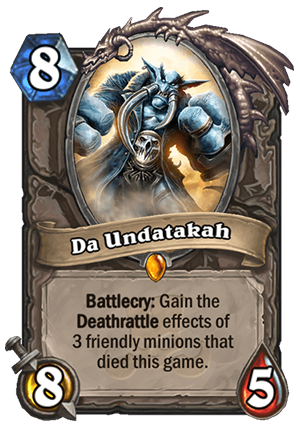 Battlecry: Gain the Deathrattle effects of 3 friendly minions that died this game.

Unlike N'Zoth, The Corruptor, Undatakah seems to be a bit too inconsistent and easy to counter to build an entire deck around it. However, I can’t imagine a world in which he won’t be a mainstay in Deathrattle-heavy Midrange or Control decks until the 2020 rotation, because his effect is absolutely powerful. If a Deathrattle deck already exists, or is close to being viable, Undatakah might push it in the right direction.

Of course, I could come up with dozens of overpowered combos with 3 specific Deathrattles, but it’s not even necessary. Just take a Deathrattle Hunter deck. Let’s say that by the time you’ve played Undatakah, two of your Devilsaur Eggs and a single Spider Bomb died. Now, this is an 8 mana 8/5 that Deathrattles into two 5/5’s and destroys a random opposing minion on death. There you go, it’s already quite insane and it’s the most basic scenario. And you know what’s the best thing about it? If you now Play Dead it, you get all three Deathrattles at once.

Deathrattle Rogue is also an almost viable deck, and this would be a huge play in that build. It runs both Devilsaur Eggs and Mechanical Whelps, and getting any of those Deathrattles is massive. Of course, the class also has ways to trigger the Deathrattles, which would create a massive board that your opponent has to remove. But wait! If he does remove it, Undatakah summons all of them again. So he first needs to single target remove it or Silence it and THEN AoE everything, which might not be an easy task at all.

And those are only the current decks that could use it efficiently. Any deck running a high density of Deathrattles in the next year and 4 months will probably at least test this card out, since there is pretty much no downside to it – you just replace a single big threat with it.