While the lists of Odd Mage, up to this point, have been focused on using the upgraded hero power to deal with early threats, using spells like Dragon's Fury and Flamestrike to transition to Frost Lich Jaina in the late-game, this relatively new list is turning the idea of Odd Mage on its head and uses it as a more versatile Hunter hero power. 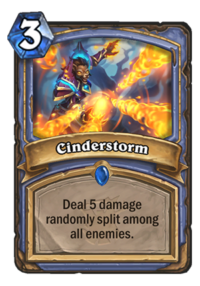 The list uses the usual, early-game minions, such as Dire Mole and Fire Fly, to get on the board, taking advantage of the class’ powerful low-cost spells Arcane Missiles and Cinderstorm to push damage. Of course, if you’re playing an aggressive Mage deck, you can’t go anywhere without including powerful secrets, like Explosive Runes, which will usually remove the opponent’s next minion and, at the same time, push damage to the face, and Counterspell, that can make the opponent waste an entire turn doing nothing.

After the early game is done, cards like Daring Fire-Eater and Clockwork Automaton can provide huge potential for bursting the opponent on consecutive turns, while the new legendary Jan'alai, the Dragonhawk brings back an old, familiar face, in Ragnaros the Firelord, that can close out games, especially if it is not removed immediately.

There are not a lot of aggressive decks that can kill you fast enough with this deck. Odd Paladin is your worst matchup, but other than that, you only need a small amount of damage from your early-game minions and your hero power can do the rest. Explosive Runes can really take a toll on your opponent, since most aggressive decks tend to play minions with low health, which lets you push more damage to the face, while also removing their threat.

This is where the hero power really shines. With cards like Daring Fire-Eater and Clockwork Automaton, you only need a couple of hits from your first few minions and you can start pressuring the opponent every single turn. It should be noted again, that those two effects stack, so if you play Daring Fire-Eater with a Clockwork Automaton on the board, your hero power will deal 8(!) damage. In these matchups, most of the time, you’re going to use Jan'alai, the Dragonhawk or Leeroy Jenkins as a finisher, provided there are no taunts in the way for the latter.

Tips and things to consider

With the hit to the Hunter decks, through the nerf of Lesser Emerald Spellstone, Mage has quickly gone from defensive to aggressive. Learning to tread the line between using the hero power to protect your minions and starting to pressure the opponent’s health is what can make the difference in your climb, but with only Odd Paladin being fast enough to outrace it, this deck is quickly becoming a favorite to take the top spot of the meta, due to the versatility of its hero power.