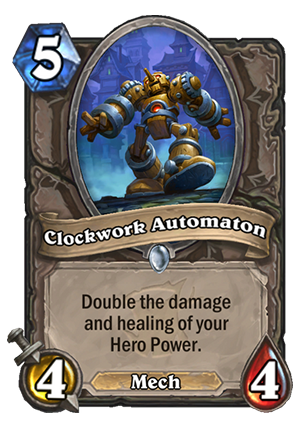 Clockwork Automaton is a 5 Mana Cost Common Neutral Minion Mech card from the The Witchwood set!

Double the damage and healing of your Hero Power.

Most mechs are pretty chill, but this one is all wound up.
Tweet

I’ve seen some people making this mistake already and seeing this is a better version of Prophet Velen. No, it’s not, because it only affects HERO POWERS and not all cards.

Another key is “damage and healing”. If a Hero Power doesn’t do damage or healing, it’s not affected by this. So, it only works positively for Priest, Hunter, and Mage (and negatively for Warlock). Which means that those three are the most likely classes that would want to use it.

Yes, the card also works on Death Knights. Yes, it’s amazing with e.g. Bloodreaver Gul'dan. But so what if it’s completely useless until you turn into your DK? And if you turn into your DK you’re already in a good spot to win? You rarely need more healing once you can heal every turn with your Hero Power. In this case, it’s just a win more. You can theoretically go for this + Prince Taldaram + Hero Power for 12 damage and 24 healing, but again, that’s a two card combo that works only after you play your 10 mana card that you might not draw until really late into the game. I could see this as a one-of tech if the meta really demands it (in other words, if you need a huge healing burst in the late game), but I don’t think it will see play outside of that.

It might, just like the Blackwald Pixie, work okay in Baku decks. Two good examples are Baku Mage and Baku Hunter. The first one would be a 4 damage Hero Power that can target anything and the second one would be 6 damage Hero Power. But, in both cases, it would cost 7 mana to play this + HP, which might not make it as powerful as it seems. For example – in case of Hunter, on turn 7, this + Hero Power is the same as Nightblade (a card you probably don’t even remember) + Hero Power. Of course, this gains the extra value of being a high priority target you absolutely have to kill, but the initial burst isn’t anything good, and a 4 health minions shouldn’t be hard to kill so late into the game.

All in all, I don’t think that a regular deck would like to play it. Maybe, like I’ve mentioned, Cube/Control Warlock with DK under very specific circumstances. It might shine in some Odd decks that need to fill the curve, but still, unlike the previous one, this card sucks on Turn 5. You drop a 5 mana 4/4 that is very easy to get rid of. It’s not a 3 mana 3/4 that can actually contest the board. So, everything said, I don’t think that this one will see lots of play.