Treant Druid is a potential archetype from the upcoming The Boomsday Project expansion. We’re still not sure about its power level, but it already has a few solid synergies. 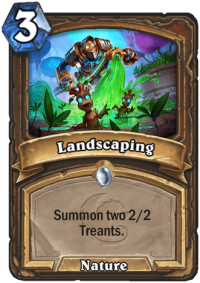 Like I’ve mentioned above, the basic deck’s play style would be very similar to the current Token Druid deck. Ramp, draw cards and remove stuff in the early/mid game. Then start playing wide boards in the late game, and forcing your opponent to remove them. Once he has no way to remove one, play a big Savage Roar, Branching Paths etc. and kill him.

Most of the Treant synergies fit really well into that kind of shell. Soul of the Forest is already played, more ways to summons Tokens such as Landscaping or Living Mana are always appreciated. Token Druid opts to run Violet Teacher instead of Living Mana, but the latter is better in this build. Not only it does not use Oaken Summons (which makes Violet Teacher a really cool option), but Treants get extra value in this build.

Dendrologist seems like a simple, mediocre card, but it can be an extra win condition. Given that it’s Discover, and this build wants A LOT of the Druid spells, there is a very high chance that at least one of the options will be good. Picking another Wispering Woods, Soul of the Forest, Living Mana or Spreading Plague might heavily increase the number of tokens you can produce and make it even harder for the opponent to remove all of them. Then, an extra Savage Roar or Branching Paths might add lots of damage to any big board. Discover is a powerful effect, because you can often choose a card, which is perfect to a given situation. For example, sometimes a Starfall‘s AoE damage might save you, other times you might get the final 5 damage (Starfire) through the Taunt to finish the game or Naturalize opponent’s big minion and mill him. 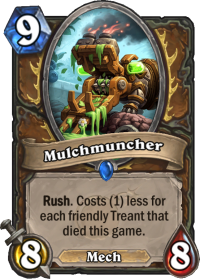 Mulchmuncher is another card, which gives you an extra win condition, while also fitting into your general game plan. With that amount of Treant generation in your deck, it’s quite easy to get it down to a few (or even 0) points of mana. 0 mana 8/8 is already big in a deck like this one, and the fact that it gets Rush means that you can have massive tempo swings in the mid-late game. If you know how powerful playing Arcane Tyrant after Ultimate Infestation feels like, this will be even better (and quite common later in the game). You can use this card to control the board, or even to get through the Taunt during your combo turn. While you can’t directly use a Rush minion to damage your opponent (on the turn you play it, that is), clearing a big Taunt so you can attack with your smaller minions is basically like dealing direct damage.

While it’s most likely not a final version of the deck list yet, I can already discuss some of the cards I’ve decided to not include. Some cuts had to be made in order to fit the Treant package, and some more might be made in the future. Also, I will talk about some other cards that synergize with the deck, but didn’t make it to my build, explaining why. 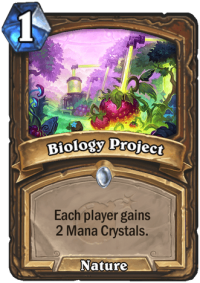