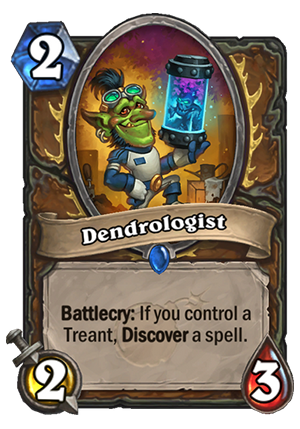 Dendrologist is a 2 Mana Cost Rare Druid Minion card from the The Boomsday Project set!

Battlecry: If you control a Treant, Discover a spell.

He's teaching his little buddy to talk, but all it says is, "I am Gloop."
Tweet

A new Druid’s theme this expansion seems to be Treants. Which is pretty cool, that’s something I’ve been thinking about (extra Treant synergies) when I first saw the Witchwood Apple card. It turned out to be a Hand Druid synergy, but as it appears right now, it has another use (that said, Witchwood Apple is still terrible, even with synergies).

The card is actually looking really good IF we assume that Treants synergies will work. 2 mana 2/3 are vanilla stats, so even if you can’t proc its effect in the early game, it’s not the worst move. And then, it has really nice mid/late game scaling. Druid is known for pretty powerful spells. Remember how Raven Idol was used in lots of Druid builds? And now with cards like Branching Paths, Spreading Plague or Ultimate Infestation, it’s more true than ever – Druid’s spells are nice, so we shouldn’t undervalue this effect. If it could be triggered quite consistently, a 2 mana 2/3 that Discovers a spell would be nuts.

That said, in order to judge this card, we need to look at the whole Treant generation thing.

I honestly think that it looks quite alright overall. What we would need to make it a viable strategy is a 1 mana 2/2 Treant, something like the Enchanted Raven. Without a Beast tag, but with Treant synergies. Curving with Treant into Dendrologist would be quite insane. Right now, there is simply no way to activate this on the curve, and that hurts a bit. When it comes to good cards that give you Treants, there are some of them – the new Landscaping, Soul of the Forest, Living Mana, even Force of Nature is okay-ish in such strategy, if you’d have more synergies. Not sure if the Living Mana would count, as it summons Mana Treants not regular Treants.

It seems like Blizzard wants to open more early game strategies in Druid, and disincentive players from putting Oaken Summons + Ironwood Golem into pretty much every build. Which is great, in my opinion, because most of the Druid builds share basically the same early-mid game core and just have different late game win conditions.

This is a really hard call. It basically looks that way – if the Treant strategy works out, this card will be great. If it won’t – it will suck. It’s too early to tell at this point, but I have to leave some rating anyway.