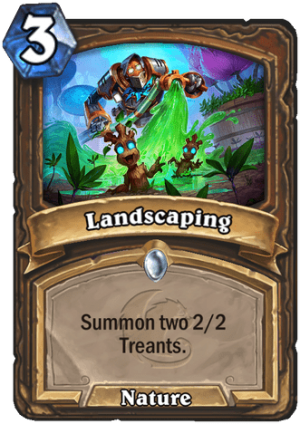 Landscaping is a 3 Mana Cost Common Druid Spell card from the The Boomsday Project set!

We'll put a happy tree right here... and give him a little friend.
Tweet

Another Treant synergy, but unlike Dendrologist, I think that it has a chance to see play as a standalone card, even outside of a Treants deck, in a regular Token Druid. There is a significant chance that Token Druid won’t want to go all-in on the Treant strategies. Not only Drendologist means that you have to drop Oaken Summons, but it might also just not be good enough. But this seems solid even in the current Token Druid decks. First of all, it fixes a significant problem Druid faces – lack of Turn 3 play. Yes, you have some great T4 plays, so if you Wild Growth on T2, you often ride your curve until the end of the game. But if you don’t, you’re usually forced to skip BOTH Turn 2 and Turn 3.

2x 2/2 is not an amazing Turn 3 play, but it’s not that bad either. Against Aggro, it gives two bodies to trade with. It works better if 3/2’s or 2/2’s will be more common, as opposed to 2/3’s, but that’s up to the meta. Against Control, two bodies can also deal some early damage and might not be that easy to remove at once. Later in the game it’s another way to summon some more tokens. Druid is often at a desperate need to summon Tokens and just doesn’t have Wispering Woods in the hand. While two extra tokens is not much, if you have something on the board already, you can get a nice Soul of the Forest. Look, this card is not great, but it’s not bad too.

It might also be interesting in the Un’Goro-style Token Druid, not the one we have right now. The Aggro build that wants to flood the board. However, Mark of the Lotus rotating out has weakened that deck quite significantly and we’d probably need another AoE buff to bring it back again.

And of course, if a Treant Druid deck becomes a thing, it will be an auto-include. You can follow it up with Dendrologist and it reduces the cost of Mulchmuncher. It would be one of the basic cards in that kind of deck. But again, whether it sees play heavily depends on such a deck getting some extra card and becoming playable.