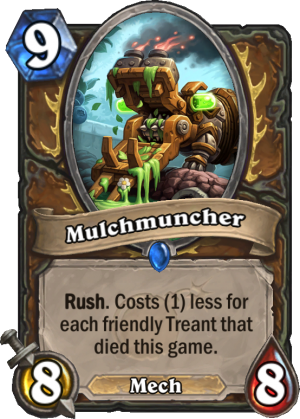 Mulchmuncher is a 9 Mana Cost Rare Druid Minion Mech card from the The Boomsday Project set!

Rush. Costs (1) less for each friendly Treant that died this game.

A little surprised that it’s not a Giant, as it fits the Giants category quite well – high initial mana cost, 8/8 stats, get cheaper when something happens. That said, I like how it looks thematically, so I don’t mind it at all.

This card is really interesting. A 10 mana 8/8 Rush is obviously bad, but cards that get discounted over time need to be looked out for. Remember Arcane Giant? That card has played a big role in many decks, because 0 mana (or at least cheap) 8/8’s are great. If you give it an extra Rush, it becomes even better – an already big tempo swing of dropping a cheap, big minion becomes even bigger.

Realistically, in order for this to be great, you’d want to reduce it to around 4-5 mana. Sure, it would be playable even at 6-7, but remember that it starts as a basically unplayable card, so you want to get as much out of it as you can in order to make up for that. So, basically, all it takes is one Wispering Woods (or Spreading Plague vs Aggro) + Soul of the Forest, or Living Mana board to make it good. Which is actually not that difficult. And the more ways to summon Treants you have, the better it becomes. I’d imagine that in a full Treant deck, you could get it down to 0 mana quite easily.

One more thing to talk about is the Mech tag. And in this case, I feel like it’s quite irrelevant. It might even be a net negative if they decide to print an anti-Mech tech. I don’t phantom being able to pack BOTH Treant and Mech synergies into a single deck, so that’s that.

Mulchmuncher would be really nuts if you could take a Treant deck and make it work. You would probably be able to play it for cheap around the mid game quite commonly, so even if the deck will be slightly sub-optimal, free 8/8’s with Rush might make up for that fact.

But assuming that the whole Treant thing doesn’t work out – would you still want to play it in Token Druid? It’s a very difficult question. First of all, you need to cut something, and it’s not as easy as it might seem. The deck is already packed and it might be difficult to make some cuts. Then, Soul of the Forest alone is most likely not enough – you need to play both of them and both of the Treant boards need to die before you can play this for free (which is obviously the goal). Maybe, maybe if you also play Landscaping – then that’s 4 extra Treants, so a Landscaping or two and a big Soul of the Forest would be enough to get it down to really cheap. It could serve as a back-up plan after your board got completely removed. You could also play it on your Savage Roar / Branching Paths turn in order to get through a big Taunt. You obviously can’t attack face, but let’s say that your opponent has Sleepy Dragon or even The Lich King on the board. Normally you’d have to run lots of damage into it, damage that would otherwise go face. With this card, you might be able to get some unexpected lethals by basically getting rid of a Taunt in your way.

Overall, I think that we should not underestimate this card. 8/8 with Rush that you can potentially get down to 0 mana can be big in the right deck. It will be an auto-include into a Treant Druid, obviously, but it might also see play in the Token Druid deck. Like I’ve mentioned when reviewing two other Treant Druid cards – what this archetype desperately needs is another synergy or a Treant, even a 1 mana 2/2 Treant would go a long way to make all of those card work more consistently.