Fatigue/Mill decks have long been a part of the Hearthstone metagame, but the release of KFT has given rise to some new tools and strategies to aspiring fatigue players. In principle, the goal is to exhaust the opponent’s resources and eventually kill them with fatigue damage once they run out of cards in there deck. Warrior is particularly well positioned to adopt this kind of strategy, with its plethora of control elements in the form of removal and board clear, its ability to gain armor as part of its hero power as well as many of its cards, and some brand new technology in the form of Dead Man's Hand. Not only does this allow the Warrior to increase the size and consistency of its library by shuffling in redundant cards, it also gives the possibility of going infinite if the Warrior can keep shuffling a second copy of Dead Man's Hand back into their deck.

Dog recently achieved Rank 2 Legend with this deck, and the approaching nerfs to aggro strategies and fast starts from Druids mean that Fatigue Warrior is well positioned in the future meta to take on the slower decks of the format.

Not a lot of changes for this list, but remember that this is a pretty off-meta choice for the ladder and is highly skill-intensive.

Generally, we always want to have card draw in our opening hand. On each of our turns, we want to be doing at least one of three things: 1) Drawing Cards, 2) Answering the Board, and 3) Gaining Armor. These are listed in priority order, as our deck is full of card draw to help us find the answers that matter in a given situation. Always mulligan away Dead Man's Hand, Coldlight Oracle, and Bring It On!, as these are easily the worst cards to have in the early game. Scourgelord Garrosh can be okay to keep in slower matchups, as we almost always want to play it as soon as possible. 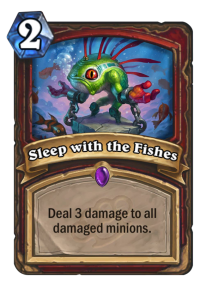 Murloc Paladin – This is likely our hardest match-up. We cannot afford a clunky draw, and it is difficult to find space to draw cards with the kind of pressure and synergy that Murlocs present. Be careful of the interaction with Murloc Warleader giving +1 Health to other Murlocs. Murlocs with only 1 point of damage on them will revert to undamaged if Murloc Warleader dies, which can blank our Sleep with the Fishes. Keep the board as clear as possible, watch out for Finja, the Flying Star and try to clear the board before it has a chance to explode. Don’t be afraid to play an early Bring It On! if the opponent has only a few cards left in hand (often, we will have to just to stay alive). Do not worry about fatiguing them. We win if we just survive.

Token Druid – There are a lot of variants, so it can be difficult to play around the right cards. Early boards can be cleared pretty easily with Blood Razor, provided they do not use Mark of the Lotus early. Be wary of Living Mana, and keep a boardwipe in reserve for that eventuality. The versions running Bonemare and Strongshell Scavenger can be challenging, particularly because Bonemare is a difficult card for us to combat. Like Murloc Paladin, the goal is just to survive as long as possible. Only use Coldlight Oracle to draw cards if a specific answer is needed and there is no other option.

Pirate Warrior – Pirate Warrior is the easiest of the aggro matchups because they do not have the same late game velocity. Blood Razor can clean up their early start, but watch out for Frothing Berserker. Southsea Captain can be problematic if the opponent is able to maintain their board, so remove it immediately. Once the Pirate Warrior gets low on cards, use one of our Bring It On! to stabilize. Pirate Warrior excels at burst damage with weapons and individual, potent threats, but armor bursts and targeted removal like Execute can put us out of range and hamstring their game plan.

Evolve Shaman – This matchup is pretty good as long as we can play Skulking Geist on time. This lines up fairly well with their preferred play of Doppelgangster into Evolve, so saving our The Coin to shortcut this can be a blowout. Keeping Brawl for this exact turn is our best defense if we do not have Skulking Geist. After Skulking Geist hits the table, their deck becomes much worse. Maintain a clear board to keep Bloodlust from generating too much burst damage, and the rest is elementary. 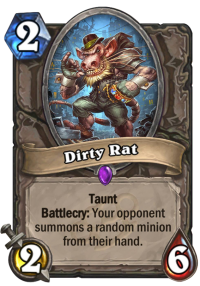 Exodia Mage – This game comes down to Dirty Rat. Draw cards as usual, but watch out for a Coldlight Oracle from the opponent that can cause us to overdraw. If the opponent is similarly close to maximum hand size, dropping our own Coldlight Oracle or two to burn their cards is a good strategy. Archmage Antonidas is public enemy number one, so stripping him with Dirty Rat or causing our opponent to burn him is often our only hope, because we cannot gain enough armor to survive an infinite turn, and we cannot present enough pressure to kill our opponent early either. If Dirty Rat grabs a Sorcerer's Apprentice instead, this can slow our opponent down and possibly keep them from being able to go infinite. 1-mana Fireball is not 0-mana Fireball, so start generating armor. If we can survive their burst turn, that usually means the match in our favor.

Jade Druid – The main reason that Skulking Geist is in the deck. If our opponent can’t put an infinite number of Jade Idol in their deck, then we can fatigue them. It also puts a cap on how large their Jades can become depending on how many other Jade cards they run, but it’s usually around 9 or 10. As in the Token Druid matchup, Bonemare is a troublesome card if they run it because of how much tempo it generates, so try to keep the board clear as much as possible. Scourgelord Garrosh is one of our best cards in the matchup, and our weapon/hero power combination can clear all but their largest Jades. Ultimate Infestation is not as good without the possibility of drawing multiple Jade Idol, and it puts them closer to fatigue. Drop a Coldlight Oracle or two if there is a chance to burn some of their cards, because Jade Druid plays a lot of expensive threats and is usually unable to drop more than 1-2 a turn.

Raza Priest – Oftentimes, this comes down to their draw. Raza the Chained on turn 5 is bad, and following it with Shadowreaper Anduin on turn 8 spells doom for us. All is not lost though, as they will have plenty of board control cards that do little or nothing against us. Track their hand size constantly, and Coldlight Oracle when we can burn some cards. Burning Raza the Chained or Shadowreaper Anduin is huge, and Lyra the Sunshard or Kazakus are big hits also. Around turn 5 is an okay time to use Dirty Rat and try to snag one of these high-impact cards, especially if you have the tools to clean it up quickly.

Big Priest – This match-up is all about exhausting their threats. An early Barnes, and the card it generates, are the major factors in how difficult this match-up is, as the subsequent revivals can be more or less challenging as a result. Execute is the important card to shuffle in with Dead Man's Hand, as it is our best way of answering their massive threats. Ysera and The Lich King are the big threats that must be removed, but it also means they have trouble with hand control, so look for opportunities to burn from their deck when their hand gets full.

Rogue Zebra has been playing Hearthstone since its release, and has been on the Free-to-Play bandwagon since the beginning. He likes to theory-craft and build budget decks in both Hearthstone and Magic: The Gathering. He streams Hearthstone three days a week on his Twitch channel, and you can also follow him on Twitter.