Mech Handbuff Paladin is an aggressive archetype which mixes the Magnetic and Handbuff mechanics. This pairing is well-suited and highly synergistic, as your buffed in-hand minions are able to make an immediate impact on the board when attached to an already-in-play Mech.

Efficient card draw from Crystology gives you greater hand size which improves both Smuggler's Run and Grimestreet Outfitter. Buffed Mechs can then be flooded on to the board using the mana-cheating of Mechwarper and Galvanizer. Many of your Mechs come with extra keywords like Divine Shield, Rush or Windfury, further increasing the efficiency of handbuffs. This deck is consistently explosive and snowballs boards in ridiculous fashion. 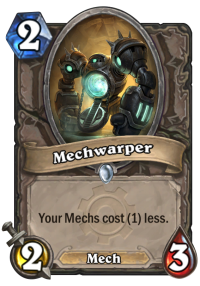 Mech Handbuff Paladin aims to have a huge tempo swing in the early game and snowball that advantage. Generally speaking, your very first turns are used to draw cards with Crystology and buff your hand using Smuggler's Run and Grimestreet Outfitter. Mechwarper and Galvanizer then allow you to flood the board in the following turns, cheating out your over-statted Mech minions.

A crucial aspect of Mech Handbuff Paladin is understanding the potential answer from the opponent and choosing the right lines in development. The Magnetic keyword is naturally quite flexible, as each Magnetic Mech can be develeoped as a buff or as a new minion. How you initially develop is entirely dependent on these potential answers. Against a Shaman you may want to push wide to play around Devolve. Flame Ward and Arcane Flakmage will naturally force you into going tall against Secret Mage. Against Warlock you might opt for a balanced attack, choosing specific health totals to play around Defile while limiting the effectiveness of Plague of Flames. It’s highly dependent the context of your hand and opponent.

These questions and decisions are not only crucial for initial development but also when deciding between trades or face damage. Your underlying motivation should be board control and resiliency, making the fewest necessary trades to preserve that control. The onus is on you to maintain tempo and initiative after the initial strike as the deck has very few recovery tools. Skaterbot can often prove invaluable when making your initial flood, as it allows you to translate your buffed minions into more immediate tempo advantages. It works incredibly well with Divine Shield minions such as Annoy-o-Tron and Shielded Minibot as it gives you the opportunity to make excellent value trades and eat up the opposition’s bigger minions. 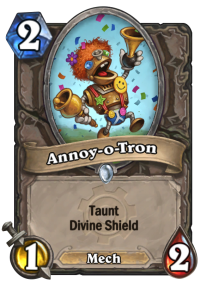 A key card in closing out games is Flying Machine. The Windfury keyword allows Flying Machine to effectively double up your Magnetic cards. It can end the game in just a couple turns and is almost always your most valuable resource and threat once on the board. Look to protect it with Divine Shield buffs and sticky Taunts minions such as Annoy-o-Tron, while making the types of necessary trades outlined above

The deck is quite refined at this stage, with very little variation in lists. The most common changes are the inclusion of Micro Mummy over Shielded Minibot, and Jeeves as a replacement for one or even both Divine Favors. Jeeves is going to be more consistent and often better into aggressive matchups, while Divine Favor has a wider range of power and is incredibly strong against slower archetypes.

If you’re efficient with mana usage, are able to make your boards resilient, and have an aggressive mindset you’ll be able to find consistent success with Mech Handbuff Paladin.

These matchups are all about tempo. Your role in this fight is going to be dependent on your hand and what type of swing you can potentially make. Sometimes within the same matchup you can find yourself acting as the control before quickly shifting to the beatdown. Understanding your role given the context of your hand and the board is far from a trivial thing in these aggressive mirrors.

As mentioned previously, how develop is going to be dependent on the specific possible answers from the opponent. Devolve is very strong against tall boards, while a deck like Secret Mage has weaknesses to more narrow boards. Resiliency is key and there will be much more trading needed on your part compared to some of the slower matchups. 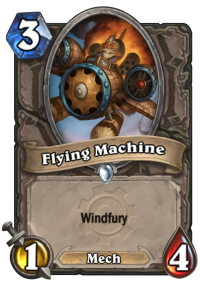 Against slower archetypes you are firmly in place as the beatdown. Aim to make your board difficult to clear, but the absolute focus needs to be on face damage. Your Magnetic minions should primarily be used to send more ‘Charge’ damage right to the head. Deathrattle effects are valuable in the face of board clears and you should look to protect them if little has to be sacrificed.

Aside from your obvious power-cards, Flying Machine is your MVP and a minion you’ll often find yourself leaning on heavily. Its high health total makes it difficult to remove, and it has the ability to solo a more passive opponent.

If you’re finding yourself falling just short of closing out games, look back on whether there was some way to alter the clock. Did you maybe over-trade? Did you give your opponent an opportunity to clear where it could have possibly been avoided? Were you trying too hard to play around answers and acting too passive? You have no reach once board is lost – give yourself the best opportunity to win the game in the limited time where the board is definitively yours.