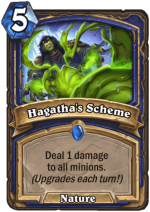 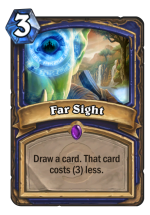 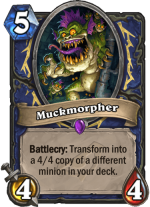 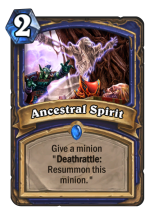 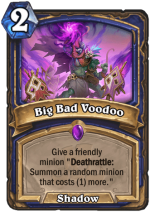 ALWAYS keep Hagatha's Scheme. In some matches, it makes the difference between wining or losing. (Against Mage, you should hard mulligan for it cos its the only way to deal with a big wall of Giants)

Far Sight is usually a good card to have at the start, as it can accelerate your game plan allowing for example for an early Eureka or Muckmorphe + Ancestral Spirit or Big Bad Voodoo. And in those early turns you are not doing much anyway.

Muckmorpher can straight win you the game if it hits the right target (like Batterhead against a token deck, or an early Colossus). Its usually important to have either a Big Bad Voodoo or a Ancestral Spirit to make your threat stick once you play Muckmorpher or Eureka!

Other than that, it would depend on the matchup. for example against a reborn paladin, hex and earth shock become super effective (and necessary) to deal with the eggs. Against murloc or token decks, you need to have as much and cheap AOE as possible. etc.

With the same core as RoS Big Shaman, this decks game plan is to cheat out Big minions with Eureka! and Muckmorpher and reinforce them with Ancestral Spirit and Big Bad Voodoo in order to overwhelm the enemy before giving them a chance to recover.

With Saviors of Uldum, only three cards are being added to this deck.

Colossus of the Moon is a massive (Probably the best in some situations) target for Eureka! and quite a decent target for Muckmorpher. In the case of summoning it through muckmorpher, it has the advantadge that if your enemy choses to silence it, it changes from a 4/4 with DS that reborns into a 10/1 with DS to a plain 10/10 and that is pretty strong by itself, so even if you  already buffed it, your enemy will have to think twice before silencing it. ofc it is vulnerable to transform effects, but so are most of the other minions in the game.

The other card i’m adding 2 copies of, is Earthquake. Since sometimes this deck if forced to play a more control route, this spell can be crucial. Its specially good to deal with reborn minions and token type deathrattles (like a Savanha Highmane as well as medium size minions. Sadly it does not kill Giants, cos then it could negate that conjurer’s call thypical combo, but it is still quite effective at clearing boards.

I decided to cut Hagatha the Witch from the deck mainly because even if her effect is quite strong when you have lots of minions to play, i have noticed that in this deck, she is not as strong.  This deck has 10 minions, and only 3 of them cost less than 8 mana. (and you expect to have played at least 2 of those 3 before Hagatha anyway) so in the end. after playing many games with this deck, i noticed that i was using her mainly for her Battlecry as in a normal game that lasted enough for me to play her, i got around 3-4 spells from her, usually 1 or 2 actually useful, and even when getting something useful, it was rarely something that could be played right away due to the high cost of most minions. So in the end, i think is better to just go for a different AOE. I’m not sure yet if it was a right decition, so  i might put her back in, in that case i would probably take out one Earthquake, Lightning Storm or Batterhead.

I also considered to add Blatant Decoy but since i don’t own a copy, i haven’t been able to test how  good it works, its probably a good inclusion tho, so i might craft it in the near future to test.

For more information on how to play this archetype and mulligan against different decks, there is a very good guide in this site that was made for the previus expansion (RoS). Most of what is explained there still holds up.