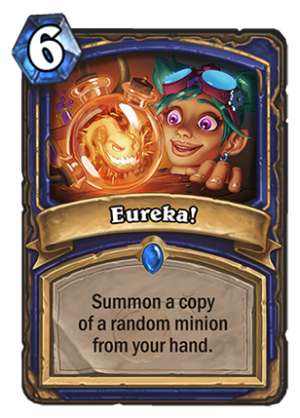 Eureka! is a 6 Mana Cost Rare Shaman Spell card from the The Boomsday Project set!

Summon a copy of a random minion from your hand.

I see people comparing it to Ancestor's Call a lot, and while it’s fair, lots of folks are missing one important thing. Eureka summons a COPY of a minion from your hand, which in my opinion makes it much better than Ancestor’s Call in the kind of strategy you’d want to use it in. Once you summon a minion with Ancestor’s Call, it’s no longer in your hand. And with Eureka – it’s still there and you can play it up to 3 times.

In Malygos build, which is the most obvious choice for this card, it means that you can e.g. Eureka + Lightning Storm if you desperately need that board clear (and 7-8 damage will most likely clear everything), but then you still have second Eureka for the combo. And then you have the regular Malygos too. Instead of having a single chance that your opponent won’t be able to answer Maly, you have three of them too. In “Big Shaman” builds that would be the second choice for this card, it means that you put a threat on the board and don’t lose a threat in your hand. E.g. you can summon some big minion up to 3 times.

It also combos really well with Electra Stormsurge. On Turn 9, by combining those two, you can make a really solid board – 3/3 + two big minions, or 2x Malygos. I imagine that most of the decks wouldn’t be able to answer that.

Now, onto the problems. When it comes to Malygos Shaman, there’s some redundancy. Shudderwock Shaman is already a combo deck. Although I wouldn’t immediately dismiss the Malygos build, Druid matchups are terrible when compared to Shudderwock. Even if you can deal 28 damage (2x Lightning Bolt + 2x Frost Shock), Druid will probably be at 50 or even more health by that time. It has so much insane Armor gain that the matchups would be nearly unwinnable. On the other hand, Shudderwock’s combo is “infinite”, so it can often go through all of that Armor over a few turns. And when it comes to Big Shaman, when it comes to your late game, you’d need to rely on the Neutral options. Shaman has no good late game, “big” minions. Al'Akir the Windlord is about the only one, but to be honest, he’s not that great standalone minion, he’s better when combo’d with some attack buffs like Flametongue. So, the deck would need to rely heavily on Neutral cards, such as The Lich King or Charged Devilsaur. And would it really be any better than other “Big” decks like Druid or Warrior?

Overall, this card has some solid potential, but it might not see play right away.