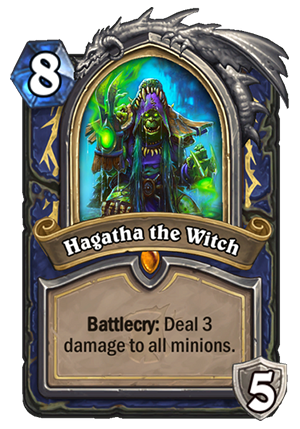 Hagatha the Witch is a 8 Mana Cost Legendary Shaman Hero card from the The Witchwood set!

Battlecry: Deal 3 damage to all minions.

Hagatha is the only Hero card in the Witchwood set! 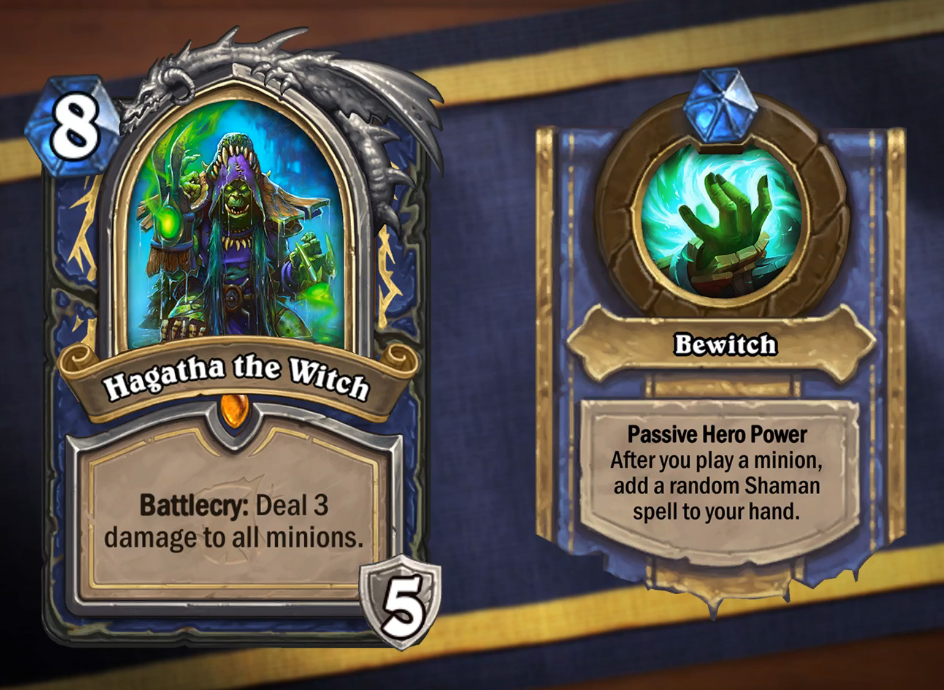 So, we’ve got a new Hero card, this time for Shaman. The previous one, Thrall, Deathseer, was supporting the Token/Evolve playstyle. Even though this one seems to synergize with lots of small minions too, it obviously doesn’t belong in such a deck. This is a Control card. From the initial effect to the passive Hero Power you’re getting, it’s just more board control and more value for slow Shaman decks.

For every minion you play, you get a random Shaman spell (the Hero Power is passive, so you don’t have to use any mana on it). In the long run, the card can give you insane value. But hey, I’ve just said that Shaman has lots of bad spells when reviewing Witch’s Apprentice. And it’s still true – but this time you get multiple spells over the course of the game (assuming a game vs other slow deck) – which means that it’s both more consistent, and that bad spells don’t really hurt you that much, since you have tons of value even if 50% of the spells you get are bad.

The thing about this is that it’s a win condition by itself in slow matchups. You can play mostly defensive cards and this should accumulate enough value over the course of the game. Getting 10-15 spells for free, even if they aren’t best, means A LOT. Which means that you can build a pretty defensive deck, and this can serve as a big part of your main late game win condition.

And I think that the card is actually solid. If Control Shaman sees play, it should see play too. It’s especially potent in some kind of slower Elemental Shaman for the extra synergies. For example, a Fire Fly becomes AMAZING with this card. It’s a great early game card, but it also gets a great late game scaling once you play the DK (two spells for free). Grumble, Worldshaker could also shine – bringing back some of the cards to your hand means more spells. Other cards that have multiple bodies, e.g. Stonehill Defender or even some Echo minion can give you lots of value too.

But I haven’t talked about the Battlecry yet. I don’t think it’s impressive in slow matchups, but it’s actually good against Aggro. 3 AoE damage might sometimes save you, and even though you’re losing the tempo (because 3 damage AoE is worth ~5 mana – e.g. Excavated Evil), it’s not that bad.

THAT SAID, this card will see play only if a slower Shaman deck, like the Control Elemental Shaman I’ve mentioned, will be a thing. Given the current state of the Shaman, it actually might not happen. Shaman would need some really broken cards this expansion to work, and after seeing three Shaman cards, none of them is terrific.

Card rating: 7/10, but probably won’t see play, because Shaman (including Control Shaman) is in a terrible state right now.