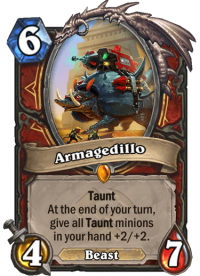 Saviors of Uldum is attempting to promote a new archetype for Warrior: Into the Fray and Armagedillo provide powerful +2/+2 handbuffs for Taunt minions, so the fantasy is that one could build a Warrior deck heavy with Taunt minions and take over the game with big taunts.

However, the road to Taunt Warrior success is long and winding. First, there is the small matter of competition from Bomb Warrior and Control Warrior. Saviors of Uldum is not a rotation expansion, so all the old powerhouses are still there, and Warrior has been one of the top classes. It is not easy to displace the most powerful decks in the game. Second, it can be difficult to see how Taunt minions win games. They defend, sure, but their statlines are typically heavy on health and low on attack, so even when buffed, they are not the fastest of threats. The entire concept of winning with Taunt minions is conflicted.

In the early theorycrafting streams, we saw no believers in pure Taunt Warrior. A couple of people put Armagedillo and Tomb Warden into Control Warrior and that’s it. Perhaps that is the best approach, although I’m not sure Control Warrior even cares that much for a couple of Taunt minions.

So, let’s take the idea of Taunt Warrior seriously. We have handbuffs with a wide effect. We want to leverage them in order to play overstatted Taunt minions and take over the game. That naturally forces us into a midrange archetype, because there is not enough room for control tools with all the minions, and there is no way we are fast enough to be pure aggro. Here is what that kind of deck could look like:

Taunt minions form the core of the deck. Ideally, we open up with Into the Fray followed up by a 4/4 Frightened Flunky or a 3/6 Belligerent Gnome on turn two and roll on from there.

Frightened Flunky is a powerful card. Because class cards are more likely to be discovered than neutral cards, Flunky has a slightly over 20% chance to offer us a specific Warrior class taunt, such as an additional Armagedillo or another copy of itself.

We can make good use of Rush synergies. Town Crier is a great one-drop that tutors for Rush minions, and three of our five Rush minions – Zilliax and the Amani War Bears – also have Taunt and can benefit from handbuffs. 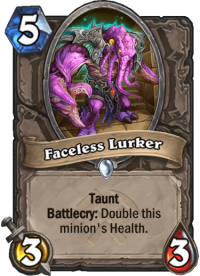 Another power play is Faceless Lurker. Without buffs, it is a five-mana 3/6, but a single handbuff turns it into a five-mana 5/10, because it doubles any health buffs it gains while in hand.

With all these high-health minions, we can try to take advantage of them surviving on the board for a while and use Battle Rage for card draw. Battle Rage also synergizes with Reborn minions, because they are resummoned in a damaged state, ready to be used for card draw. Warpath can be used to ensure that we have some damaged minions on the board in order to draw cards, or in order to make some copies with Bloodsworn Mercenary.

Our hard removal of choice is Execute, which goes well together with Warpath and with some of our early minions, such as Town Crier, as well as with the Hero Power of Dr. Boom, Mad Genius. Finally, Grommash Hellscream is a finisher that also likes to be damaged. Playing around with damage synergies and high health is central to the deck.

This type of Midrange Taunt Warrior got a lot of support in Saviors of Uldum. For this build, I chose to not use Tomb Warden, because while it can be a big pile of stats when handbuffed, it comes in very late, and I want results faster. I also skipped Phalanx Commander and opted for more Taunt minions instead to maximize the effects of handbuffs. Therefore, there are still more cards on the bench to tweak the deck with.

The hardest slot on the deck was three-drops. There are no truly impressive three-mana Taunt minions right now. I’m not a huge fan of Infested Goblin, but I want to give it a chance, because, well, there is nothing better at three mana anyway. The Taunt tokens it gives you when it dies might be fine with some handbuffs, even though I don’t expect great things from them. Bloodsworn Mercenary, on the other hand, is an interesting card with a lot of potential, but it requires a damaged minion on the board to copy. This can either be part of some combo play, or something needs to stick on the board for a turn. Given that Taunt Warrior has lots of high-health minions, this deck has a decent chance to enable some copies.