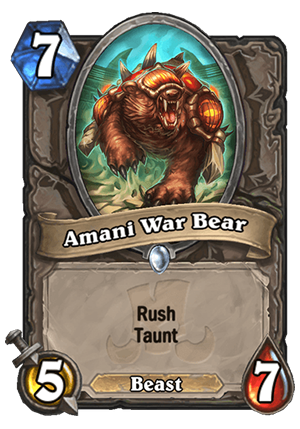 "I used to farm for hours! Now they just come in packs?"
Tweet

Amani War Bear seems to be better than your average pack filler (useless Neutral common that is there just to increase the number of cards in set), but it doesn’t seem good enough to be viable in Constructed.

Rush and Taunt is a pretty weird combination too. On the one hand, you want your Taunt minions to be as healthy as possible, but on the other, you want to run Rush minions into something right away.

Beast tag is the card’s saving grace. I was thinking about Deathrattle Hunter, but here’s the thing – Witchwood Grizzly seems to be a better Taunt card (less attack, but usually more health in matchups that matter and significantly cheaper + gets full stats if summoned and not played), while Charged Devilsaur seems to be a better “rush” card (more attack, can also attack face if summoned, which is big). This is something in between – a bit more flexible, but not as good as one specific role.

Maybe if some kind of Big Beast Druid pops out, it might make a cut? After all, pulling it with Oondasta or reviving with Witching Hour seems good. But at the same time, until Charged Devilsaur is still in Standard, you’d probably want that one instead (since it lets you become more aggressive).

Or maybe even Odd Quest Warrior? Regular version has some more big Taunts to work with compared to the Odd version (e.g. Primordial Drake and The Lich King), so it could POSSIBLY fit in there. But I don’t think it does enough for its stats in a deck like that.

It’s a solid Arena card, but doesn’t seem to be good enough to make a cut in Constructed.