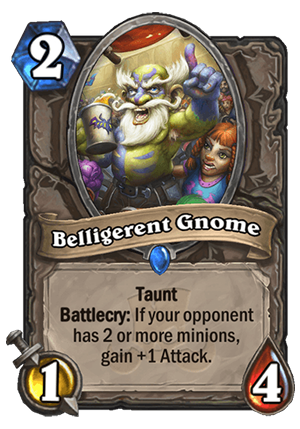 Taunt Battlecry: If your opponent has 2 or more minions, gain +1 Attack.

Maybe don't put this one in your garden.
Tweet

Poor, poor Silverback Patriarch, he can’t catch a break. But if I had to compare this card to something, it reminds me of Wyrmrest Agent rather than Silverback Patriarch. Both cost 2 mana and are 1/4’s that conditionally transform into 2/4’s with Taunt. Unlike Wymrest Agent, however, even if this card’s condition isn’t met, it still has Taunt. Let’s be honest – an unconditional 2/4 Taunt for 2 mana would be great and it would see play in many different decks. But a 1/4 Taunt for 2 mana… well, I wouldn’t say the same thing about it. It’s pretty weak. We have a 2 mana 1/5 that doesn’t see any play despite being a Mech (Upgradeable Framebot), and I don’t think that adding Taunt while removing 1 health would fix that. Druid even has a 1/5 Taunt, which can also be a 1/2 Scarab with Poisonous (Druid of the Swarm) and while the card is okay, it’s not good enough to see play in slower Druid builds. So now, whether this card will see play or not depends on how often this condition will come up.

The main issue with this card is that it’s not really a 2-drop. Maybe if you’re going second and your opponent has a 1-drop into a 2-drop opening (or something similar, which puts them at 2 minions on T2), or when you go first and your opponent coins two 1-drops, but those things don’t happen every game. I’d wager that most of the time, this card would be a 1/4 on Turn 2, and that’s not great – this card would be most impactful on Turn 2.

Another “issue”, but that’s maybe not really an “issue”, is that this is not exactly an anti-Aggro card. To be perfectly honest, I think that faster decks might play it more than Control. I mean, even Tar Creeper was quickly adopted by Aggro, and it’s like the opposite of Aggro card, since it has only 1 Attack on your turn. But protecting your board is always good. For me, this card should be a great fit into faster decks, especially Even decks that don’t play Prince Keleseth anyway, such as Even Paladin or Even Shaman. They are struggling for good 2-drops, since it’s an incredibly important mana slot (as they need a good 2-drop on T2 and T3). Talking about Keleseth, any deck running Keleseth also probably won’t drop it to play this guy. I honestly can’t wait until Keleseth finally rotates out, so decks could actually play a variety of 2-drops instead of being stuck with Keleseth, because it’s just the best one.

Right now, I don’t think that this card will see a lot of play in Control. You wouldn’t want to play it over Tar Creeper (which is not only unconditional, but it also kills any 3 health minions that decide to hit it), and you don’t want to put too many early game Taunts. But Tar Creeper rotates out in the next expansion after Rastakhan’s, which might give this guy an opening. But I think that it will see play in more Midrange-ish decks, like Even Paladin or Shaman I’ve mentioned above. But it still ultimately depends on the meta – the more board flood decks there are (Odd Paladin, Zoo Warlock, Even Shaman etc.) the better this card becomes. 2/4 body doesn’t scale too well into the mid/late game, so realistically you want to be able to play it in the early game as often as possible.

Overall, it’s pretty solid now, but I think that it has even more potential after the rotation. Plus it heavily depends on the meta, since its effect is better the more board flood decks are being played (like MCT, but to a lesser extent).

Card rating: 7/10 until Tar Creeper is in Standard (because you wouldn’t want to play it over Tar Creeper in decks that can play 3-drops), but can get better after it rotates out.