Our Battlecry (Quest) Shaman deck list guide for the Saviors of Uldum expansion features one of the top lists for this archetype. This Shaman guide includes Mulligan Strategy, Gameplay Tips, Card Substitutions, and Combos/Synergies!

Quests are back! This time, the completion is much simpler (and faster), without a need to play the reward as a card, but rather gaining a new hero power immediately upon completing it. In the case of Shaman, the Quest is Corrupt the Waters, that requires you to play 6 Battlecry minions, with the reward being Heart of Vir'naal, an on-demand Brann Bronzebeard effect for the entire turn, for a mere 2 mana. Although there are a couple of ways you can build a deck like that, the more popular and effective, at this moment, seems to be one centered around a number of good tempo cards, plus lackey-generating ones and Shudderwock as a kind of finisher. 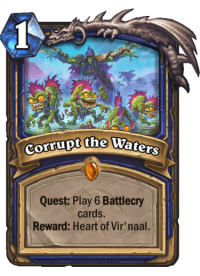 The deck aims to complete the Quest Corrupt the Waters as soon as possible, before turns 5-6, so it can start getting a lot more value and tempo out of the battlecries that the deck contains. The deck could be described as a tempo-midrange deck, that tries to get on the board with its early game cards, then using Heart of Vir'naal to really start taking advantage of the battlecries. The “upgraded” hero power can generate a lot of value and tempo, helping you establish a board constantly, eventually aiming to run the opponent out of answers.

Most of the battlecries have to do with card-generation, specifically Lackey-generation. Out of the 6 available Lackeys, the deck prefers Ethereal Lackey for value, Witchy Lackey for tempo and Kobold Lackey for tempo as well. You should keep in mind that Shudderwock will replay all of the Battlecry effects that you played up until that point, so you should try to keep a relatively empty hand, since you’re going to be adding a good number of cards to your hand. Furthermore, if you’re going second against a slow deck (mainly Warrior and Priest), it could be a good idea to keep The Coin so you can use Heart of Vir'naal and Shudderwock in the same turn, making for a truly powerful turn.

Your mulligan does not really change much for different matchups, as your main concern is completing Corrupt the Waters as soon as possible, which will allow you to out-tempo most aggressive and midrange decks. Keep in mind that Corrupt the Waters always starts in your hand, so you essentially have 1 less card to mulligan.

These changes make the deck a bit more late-game focused, sacrificing a good amount of early-to-mid game tempo for a lot more late-game value. Barista Lynchen can be used to get back copies of valuable Battlecry minions, such as Siamat and Swampqueen Hagatha, even 2 copies of each, if used with Heart of Vir'naal. The two copies of Hagatha's Scheme provide a safe net against the possibility of your opponent’s board getting too big, giving you the initiative to get back on the board. And if you’re playing against an aggressive deck, Giggling Inventor can provide a wall of Annoy-o-Trons (2-4 of them, depending on whether you use Heart of Vir'naal), giving you enough time to stabilize and get ahead on the board.

Although the deck is pretty straighforward, due to the nature of the card-generation rng and the ability to have powerful swing turns with Mutate, it provides a lot of opportunity to approach each game differently, depending on the matchup, and adapt to that opponent’s weaknesses.