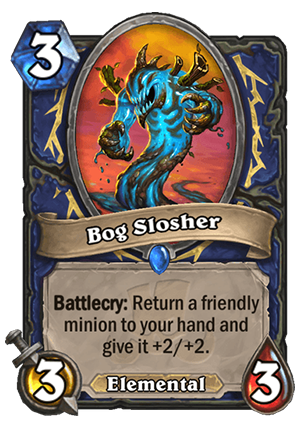 Battlecry: Return a friendly minion to your hand and give it +2/+2.

It's the bane of freshly mopped floors everywhere.
Tweet

I see a lot of people mentioning Shudderwock Shaman when talking about this card, but I’m honestly not sure why. Right now you don’t want to play it over Grumble or Zola, and after the rotation the archetype is dead in water anyway, because it loses both Grumble and a way to duplicate Shudderwock in the first place (Saronite Chain Gang). Not to mention that Youthful Brewmaster performs basically the same role, because you don’t really care about +2/+2 on your Shudder that much.

But I do think that this card has potential, more as a value play, but also with a bit of tempo swing potential. You see, bouncing a minion back to your hand is really a negative tempo. But there are some minions which not only benefit from it, but also can take a solid advantage of the buff. Saronite Chain Gang I’ve already mentioned is one of them. You can bounce a single 2/3 Taunt, and then replay it as a 2x 4/5 Taunt for 4 mana next turn. Any kind of card with Charge, Rush, Divine Shield or Taunt can benefit from that buff. For example, later in the game, you can drop Zilliax, kill something, bounce it back and replay it as a 5/4 next turn.

It also works nicely on cheap minions with Battlecries, e.g. Witch's Apprentice – for 5 mana, you can play Witch’s Apprentice, bounce it and replay it again – you get 2 random Shaman spells, a 3/3 and a 2/3 Taunt. Pretty solid value play and not a very bad tempo play.

I think that the minion has some potential in Midrange Shaman archetype, not a Shudderwock deck, but something that can benefit from replaying Battlecry etc. minions, especially a deck running some Elemental synergies (since this card is an Elemental too).