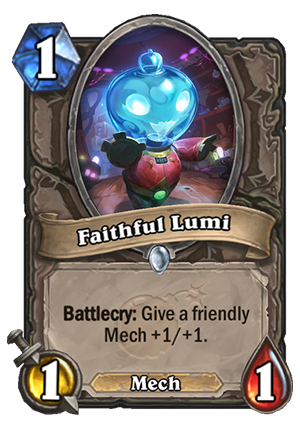 “Cute card” of the set. Those usually cost nothing, but well, this one would be pretty broken at 0 mana. At 1 mana, however, it’s certainly below average. In theory, it’s a 1 mana 2/2 if you add Battlecry to the stats. But in order to get advantage of the Battlecry, you first need ot have another Mech on the board. Which makes it a terrible T1 play. Even 1 mana 2/1’s are bad right now, and 1/1 does basically nothing.

1-drops that you can’t really play on T1 aren’t usually best ones to put into your deck, especially if the deck is aggressive. In case of this one, the only real synergy I can see is the one with Upgradeable Framebot. 1/5 stat line is defensive, but not exactly threatening. If you make it a 2/6, or even 3/7 with two of those, now it can put much more pressure. In the mid game, however, you can just buff your stuff with Magnetize, which means that this card is useful only during a very small time frame, probably around Turn 2-4, assuming that you are able to stick a small Mech to the board. Both the 1/1 body and a +1/+1 buff gets irrelevant quite quickly.

Not the worst card ever, but doesn’t look very strong. It’s a bit like Shattered Sun Cleric – weak on-curve stats, okay early game Battlecry, but only if you have a Mech on the board (and you can’t really have one in case of Lumi, unless you Coin another 1-drop out).