Tracker is one of the monster hunters you will get to choose from in the new Monster Hunt mode. We’ll be listing all of the tips and tricks, best treasures and equipment, for you to make your way through some fierce beasts on your way to the final nemesis and then to Hagatha!

You might recognize the Tracker as Tess Greymane one of the Rogue legendaries from The Witchwood expansion. She is representing the Rogue class, but has a mix of Rogue and Hunter cards in her starting deck.

The Tracker’s Hero Power is Scavenge (2 Mana): Discover a class spell that has been played this game. This is another pretty interesting hero power, and can be good but if the monster you are facing only plays dumpster cards then it’s going to end up being kind of weak. If no class cards have been played, you will get a 0-mana spell card that does 1-damage. This card is actually quite good as a combo initiator! 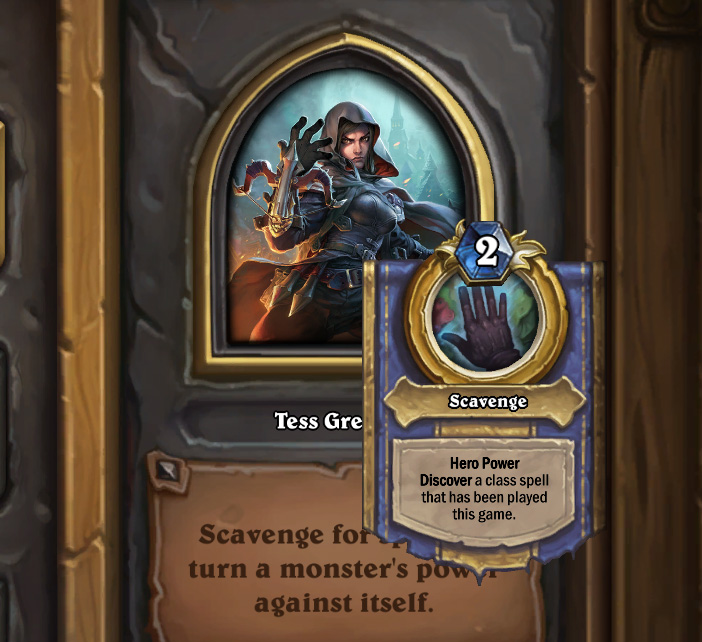 We’ll explore the Tracker’s theme options once the Monster Hunt is released. If you didn’t play Dungeon run, you will get to pick from sets of cards that essentially have themes. Generally, it’s best to stick to a similar theme, but sometimes you’ll want to mix and match depending on the card selections.

The arsenal bucket is focused on weapons like Kingsbane and Gladiator's Longbow. It also has weapon buffs like Envenom Weapon.

Jade in the Rough

Jade influenced bucket that can spawn cards like Shadowstep and Sonya Shadowdancer that will give you extra chances to spawn more jades. You’ll also find your standard jade stuff like Jade Spirit.

This bucket is more about Pirate minions, so you’ll see Patches the Pirate and things like Dread Corsair.

More of your basic Deathrattle styled cards with Unearthed Raptor and Anub'arak as examples!

Not quite sure about this one, I’ve seen Evasion, Beneath the Grounds, and Brann Bronzebeard from it so far.

Looks similar to arsenal in that it is weapon based, but might be more focused on minions with stuff like Goblin Auto-Barber and Runeforge Haunter.

More removal based options that tap into your assassination side. Some cards you’ll see here are Snipe and Big Game Hunter!

Cult of the Wolf is one of Tracker’s best options when choosing passive treasures: “You can use your Hero Power twice each turn. It costs (1) less.” This allows you to get multiple cards that have been played and works well with cards like Shadowstep and Preparation. If you have jade synergy in your deck, then pulling multiple Shadowsteps allows you to ramp up your jades very quickly. When a class spell has yet to be used, you will get a 0-mana spell that does 1-damage. This is a great card and can set off your combos with ease or allow you to ping minions.

Sticky Fingers is also very good if you are utilizing your hero power a lot: “Cards that didn’t start in your deck cost (1) less.”

If you get to the end of your run you will likely be facing your nemesis: Captain Shivers! He runs a Kingsbane Rogue styled deck with a hero power that grabs a random weapon from his deck. If you want to learn more about this encounter, check out our How-to Defeat Captain Shivers Guide!

Here are some tips to get you going with Tracker if you are having trouble.