Time-Tinker is one of the monster hunters you will get to choose from in the new Monster Hunt mode. We’ll be listing all of the tips and tricks, best treasures and equipment, for you to make your way through some fierce beasts on your way to the final nemesis and then to Hagatha! 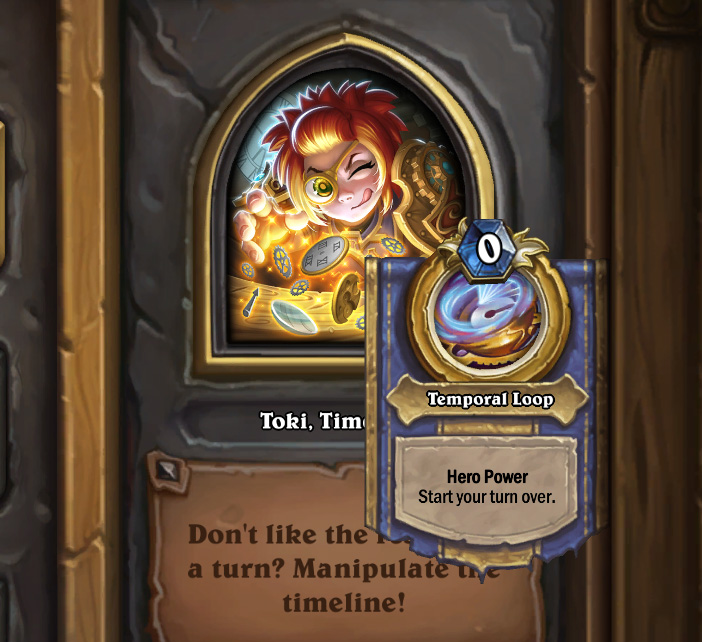 You might recognize Toki, Time-Tinker as one of the Mage legendaries from The Witchwood expansion. Toki’s starting deck combines some classic Mage cards with a bit of randomness. You start with a single copy of the following cards:

The Time-Tinker’s Hero Power is Temporal Loop (0 Mana): Start your turn over. It’s basically a large Control-Z you can use to undo any misplays. More importantly, however, is that it lets you re-roll any of the random-effect cards you’ve played in a turn. Did you cast Arcane Missiles, but the targets you wanted to hit are still alive and well? Don’t worry, Toki’s got your back. Just hop back in time and try again! Except for which cards you draw – those are in a specific order and will not change – you can try to up your luck with anything, from Discover to randomly summoned minions.

Below you can see what the Hero Power looks like when you use it. 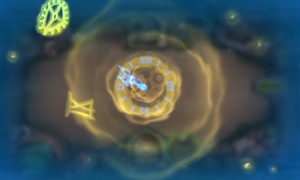 Toki’s card buckets consist of similar tools as Mage’s buckets in the Kobolds and Catacombs Dungeon Run, although there are a few new ones too:

Aside from the ‘neutral’ Passives and Treasures Toki can choose from, she has a couple that are unique to her character.

It takes a while before you get accustomed to Toki’s play style. While many turns will go like any game you’d play as Mage,  it gets tricky when there’s randomness involved. Although you’re not likely to calculate the exact odds of all the RNG cards you’ve played, it is crucial to think hard on the turn that has just passed. How good was it, and what could’ve gone better? More importantly: If you reset the turn and let the dice roll again, what can go worse? Using Toki’s Hero Power is fun and games for a while, but replaying entire turns that have little impact quickly becomes.. eh.. repetitive. Be mindful of that if you want to progress with decent speed through the Monster Hunt.

Much like with most Dungeon Run and Monster Hunt decks, opting for a Midrange strategy is the way to go. Trying to take control over the board from turn 1 might be difficult against some opponents, but it’s rarely impossible when the right choices have been made prior to the encounter. It might be counter-intuitive for a class so rich in spells, but the fight for board control with most opponents happens through sheer minion pressure. Pick up a Blizzard, Volcanic Potion and maybe a Flamestrike along the way, but don’t go overboard and create a Big Spell Mage deck. Similarly, targeted removal like Polymorph is good as a one-of, but it’s an expensive tool.

The same balance between cost and pay-off should be kept in mind when picking random effects. Yes, a Yogg-Saron can be hilarious (especially when you can play him twice), but it’s rarely going to do much of significance. Cards like Deck of Wonders and Cabalist’s Tome have the same footnote, though the latter one of those two can be justified if all the other options are downright horrible. On the contrary, Discover cards like Primordial Glyph and Ethereal Conjurer can be of great value. Their ‘controlled’ randomness scales massively with Toki’s Hero Power.