Cannoneer is one of the monster hunters you will get to choose from in the new Monster Hunt mode. We’ll be listing all of the tips and tricks, best treasures and equipment, for you to make your way through some fierce beasts on your way to the final nemesis and then to Hagatha!

You might recognize the Cannoneer as Darius Crowley one of the Warrior legendaries from The Witchwood expansion. He will essentially be representing the Warrior class and probably start out with a bunch of Warrior cards as his core deck.

The Cannoneer’s Hero Power is Fire! (2 Mana): Fire your Cannons! If they kill any minions, refresh this. When you start a game you will have a Cannon on your side of the board (limiting you to six minions on the board), once you use your hero power, it will deal damage to the minion directly opposite of it. If you remember the chess game from One Night in Karazhan then that is similar to this mechanic. If there’s no minion to hit, then your cannon will go to the face. You can also get cards that buff the cannons and have synergy when you use them! 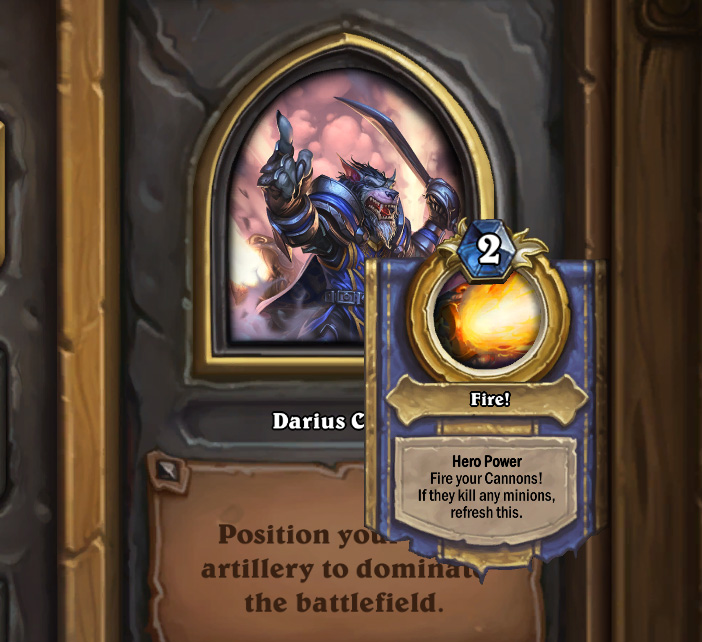 One of the new additions to the Monster Hunt are class-specific treasures! Below you see some of the general and Cannoneer-exclusive choices:

While your Cannon ability may not seem too strong, especially without upgrades, it still can offer a ton of utility throughout your run. Smart positioning can lead to a very cheap and powerful board clear; for that you have to position your cannons between two minions so that they hit both minions for the maximum amount of damage. It can also provide great burst damage, especially if you manage to get multiple Cannons on the board. You can, for example, use one Cannon in the middle to clear minions to get the Hero Power reset while the other one repeatedly fires into the opponent’s face. You should also try to position your minions around your Cannon so that it always has two minions “in front of it”!

Crowley is a Warrior after all, so you have access to a lot of Whirlwind effects and Rush minions. The Rush mechanic was born to compete in a minion-heavy game of Hearthstone, and the Monster Hunt provides exactly that! Trading with your Rush minions and Whirlwind effects can lead to incredible Cannon board clears or easy lethal opportunities with cards like Grommash Hellscream or Frothing Berserker.

Guess what? Inspire is back, and it’s great! Minions with the Inspire keyword will most definitely snowball your board. Cards like Kodorider or Kvaldir Raider often won’t be removed immediately, and that will cost your opponent greatly! Try to pair these minions with treasures that synergize with your Cannons to get the most out of your Hero Power.

We’ll explore the Cannoneer’s theme options once the Monster Hunt is released. If you didn’t play Dungeon run, you will get to pick from sets of cards that essentially have themes. Generally, it’s best to stick to a similar theme, but sometimes you’ll want to mix and match depending on the card selections.

Late game cards that gain you armor or synergize with armor and armor gain. Examples include Ironforge Portal & Geosculptor Yip.

Minions with charge and rush are to be found here. Leeroy Jenkins and Militia Commander are some examples.

Damage your minions and gain buffs and more! Cards like Frothing Berserker and Death's Bite reside in this bucket.

Likely stuff to lower your hero power and synergize with the cannons. I’ve seen Commanding Shout and Maiden of the Lake in this bucket.

If you are looking for Dragons then you found the right bucket! You’ll find cards like Faerie Dragon and the old Blackrock Mountain Dragon: Chromaggus.

Legendary cards are here to help you defeat your foes, expect to see stuff like Ysera and Woecleaver.

Your old favorites from Aggro Pirate Warrior are here and ready to fight it out for you!

Weapons and damages spells are under strike. Look for Gorehowl and stuff like Slam.

Taunt based options like Sludge Belcher are here to protect your face!

You can find cards with battlecry in this bucket, you’ll see stuff like Dark Iron Dwarf and Azure Drake.

In some runs when you reach the end of your monster hunt with the Cannoneer then you will be face off against Lord Godfrey. This is a unique fight exclusive to the Cannoneer! 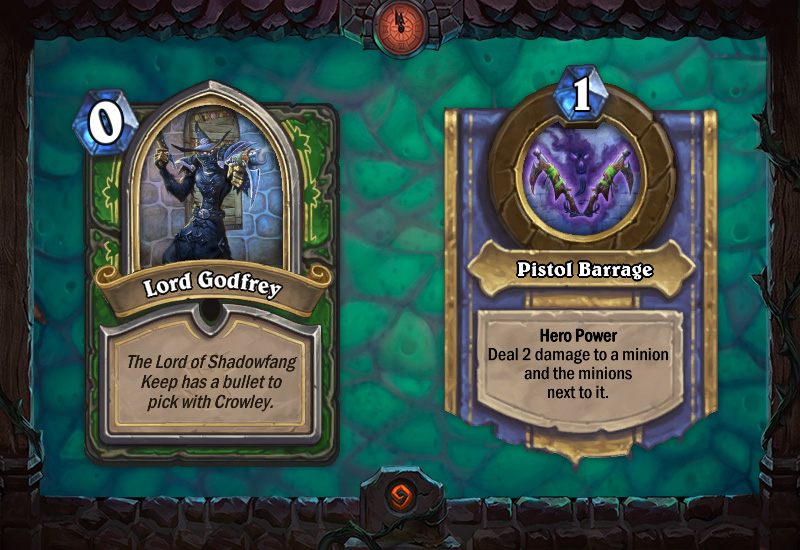 How to beat Lord Godfrey

Compared to other final bosses like Azalina Soulthief or Scarecrow, Lord Godfrey seems to be a piece of cake. His deck mainly contains Hunter cards combined with more aggressive neutral minions. The only real threat of his list is Gahz'rilla which can get out of hand pretty quickly if you don’t run removal like Execute. Other than that, most of your Taunt and Rush minions should take care of his line-up; your Cannons will help with minions like Savannah Highmane, and can snowball you to victory if you can hit Bittertide Hydra multiple times with it.
Position on board is key as well, as his Hero Power works similar to cards like Cone of Cold; try to station your Cannons between your minions so that Godfrey can only hit one or two of them.