The Houndmaster  is one of the monster hunters you will get to choose from in the new Monster Hunt mode. We’ll be listing all of the tips and tricks, best treasures and equipment, for you to make your way through some fierce beasts on your way to the final nemesis and then to Hagatha!

You might recognize Houndmaster Shaw as one of the Hunter legendaries from The Witchwood expansion. He will essentially be representing the Hunter class and probably start out with a bunch of Hunter cards as his core deck.

The Houndmaster’s Hero Power is Dog Whistle (2 Mana): Summon a 1/1 Bloodhound with Rush. This should allow you to bulk up your board and fight off any small minions that your monster fight might have. 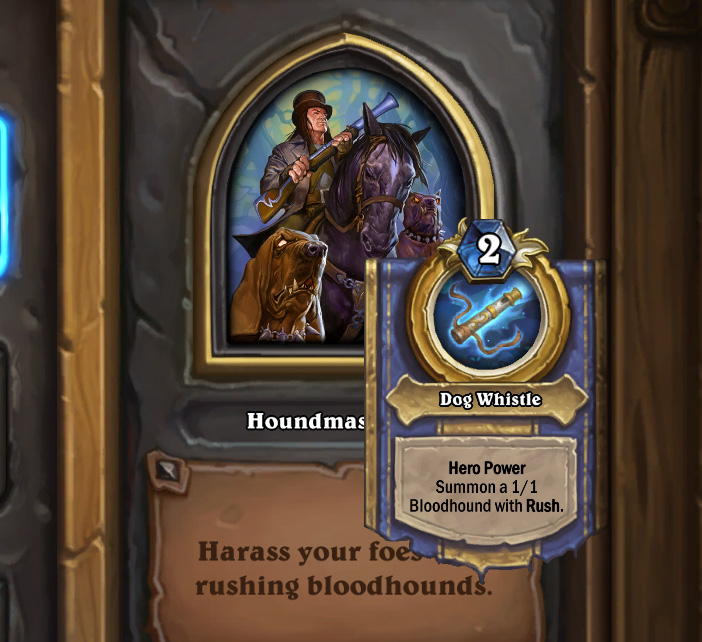 Shaw’s hero power is simply incredible and it can single-handedly win you most of the encounters: not only does it allow you to easily interact with the board, it is also a source of essentially infinite value if the game goes long: if you weave it in as often as possible, the early encounters should pose no problem to you. The inclusion of Kill Command in your starting deck allows you to easily finish off the early bosses as five damage is a massive chunk of their health. Since your hero power guarantees the presence of a beast on the board, you will always be able to trigger it past turn five, so always consider going face once you’ve drawn it during the first stages of your hunt.

Both Houndmaster Shaw’s hero power and his starting deck lean towards a tempo strategy, and adding mid-sized beasts and synergy cards to your deck is good enough by itself to carry you over the finish line:  the Companions loot box is perhaps the best of the bunch as it regularly includes Crackling Razormaws and Mark of Y'Shaarjs: these cards can help you get the snowball going very early on, and they have stellar synergy with your hero power. A slightly inferior, but still effective approach is to pick valuable Deathrattle cards from the Unwavering bucket, especially if you can find treasures that synergize with them: however, that particular choice often features bad minions like Baron Rivendare, so be careful with it. In general, you can build a powerful enough tempo deck to beat every monster in your path.

Perhaps the single most impressive treasure available to you is Companionship, which grants +2 Attack to your Bloodhounds generated by your hero power. If you pick it up, your hero power will usually allow you to trade zero-for-one with your opponents’ minions and you are almost always advised to press that button on your turn. (If you get to pick up two, enjoy your close to guaranteed win!) It also synergizes greatly with another incredible card, Bubba: not only is it a 9/9 Beast for 7 mana, but it also summons six Bloodhounds that automatially attack a selected enemy minion. Not only do the excess puppies survive, they also gain the Companionship buff if you happen to pick up both treasures. If you commit to the tempo strategy, Shaw’s Shank is also a great choice: a 3-mana weapon with a whopping five durability that starts off with one attack but gains +1 for every friendly minion on the field: you can really get a lot of mileage out of it with smart trading. As per Dungeon Run standards, it’s always worth picking up Potion of Vitality to double your health, especially considering how Shaw generally lacks proper AoE options, meaning it can take some time and effort to take over the board against the tougher bosses. Also, you might want to consider the Spyglass as an option for the final challenges: a 2-mana spell with Echo that puts a copy of a random card in your opponent’s hand into yours: it also costs three mana less than it normally would. It can help you get over the edge in the value game, and it can be especially useful against your Nemesis.

If you reach the end of your monster hunt with Houndmaster then you will sometimes run into Glinda Crowskin. She is the Houndmaster’s nemesis, so check out her information below! 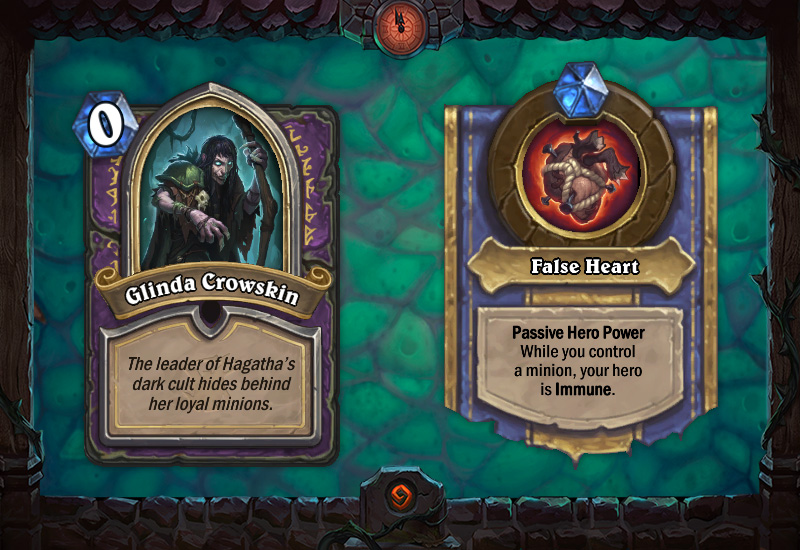 When she’s not terrorizing your monster hunt runs Glinda Crowskin is also a Warlock Legendary from The Witchwood expansion.

The showpiece of this bossfight is a set of minions called Crowskin Faithful: 3 mana 6/3s with a deathrattle that draws a card and then shuffles the minion back in the deck. Other than that, Glinda tries to get as many sticky and annoying critters on the board as possible in order to keep the False Heart beating: expect Imp-losions and Splitting Festeroots to make your day difficult: luckily, you will be able to value-trade with most of them, and that is the key to victory in this battle. Make sure you don’t overcommit as the deck also contains Abyssal Enforcers as well!

In a way, Glinda is very similar to The Darkness in the original Dungeon Run: her hero power makes it fairly difficult to get damage through, especially considering the stickiness of some of her minions. While the fight may seem close to impossible at first considering the Deathrattle of the Crowskin Faithfuls, it is essentially another battle into fatigue: you can regularly use your opponent’s Cult Masters against her to burn through her entire deck, and once the fatigue counter racks up, you only need a few clean turns to get in the damage you’re looking for. (The AI also makes some incredible misplays in this fight, like not playing the Crowskin Faithfuls when there is lethal on board.) Basically: just hang in there and try to get as much value out of your hero power and other options as possible, you shouldn’t have to put up with too much pressure over the fight.

You can gain a massive advantage by being very conservative with your Hunting Mastiffs: your hero power will almost always do the same job, meaning if you can save the card, it can provide a full board re-fill on its own, which can be really important in this battle.