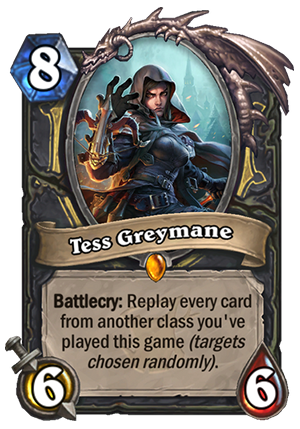 Tess Greymane is a 8 Mana Cost Legendary Rogue Minion card from the The Witchwood set!

Those who cannot remember their card history are doomed to repeat it.
Tweet

Now that is a Legendary Rogue deserves. While I understand the general hype, I’d not be SO sure about it yet – you need to remember that lots of cards like Swashburglar or Ethereal Peddler are rotating out, meaning that while the archetype gains lots of potential, it also loses some vital cards. With all of those cards present, I think that it could be seriously possible. Right now? I’m not sure.

What works really, and I mean really well for Tess is that she plays any CARD from the other class, not SPELL. Because given her random nature, playing only Spells would mean that she’s a much weaker pre-nerf Yogg-Saron, Hope's End, since Yogg activated once for every spell you’ve played, not only for the spells from other classes. However, since she plays minions too, she might be a great way to refill the board. You will just need to keep the spells that can have potentially devastating effects for after you’ve already played her, though. For example, playing that random Twisting Nether you got might not be the best idea if you plan to play Tess soon, as you might drop a bunch of minions and then Twisting Nether everything.

Since the replayed cards are cast in a random order, there is only so much control you can have over it. Between the RNG of the cards you get, and the RNG of the order and RNG of the targets, this won’t really be consistent. Yes, you might just not play AoE spells or removals you get from the random cards so you won’t have a chance to hit it… but what if you need to play that removal? Or what if you get only “bad” cards to replay with Tess? You just don’t play anything and let your opponent kill you? There is just too much that can go wrong. You could play Lilian Voss to re-roll your bad spells, but that’s a one-time thing assuming you draw her.

So, even though I think that this card has potential and it might eventually see play (or see play in Wild), I don’t think that her time is now. The archetype still basically relies on playing weak cards from the opponent’s class that might have no synergy with your deck whatsoever. Yes, this card is a nice pay-off, but that’s the only one. The rest of your deck is still quite underwhelming.

I think that this card has potential, but I don’t think that a Burgle Rogue will be a thing YET (in Standard, at least). You might still want to run her with just a few cards like Hallucination or Blink Fox instead of building a whole deck around the Burgle synergies. For example, I still wouldn’t want to play Spectral Cutlass – it looks bad even if you build a Burgle deck.

I would see something like a mix between Burgle and Miracle Rogue, something like that. But this card is definitely not enough pay-off to go all-in on the Burgle cards. We’ll need not more Burgle cards, but more Burgle SYNERGIES for this kind of thing to work. Like, you wouldn’t play a full Dragon deck and run a bunch of suboptimal and non-synergistic cards if you had only one Legendary that synergizes with the Dragons.