Captain Shivers is one of the final bosses you will potentially face on the way to completing your Monster Hunt run! Our guide details all of the information you will need to know to defeat this boss!

This is a really tricky boss, as it plays similarly to Kingsbane Rogue from the Kobolds and Catacombs meta, with the added benefit of a guaranteed draw of Kingsbane at the start of the turn. This makes any rushing-the-face strategy really difficult, since the Captain can buff his weapon pretty quickly and gain a huge amount of HP back each turn, though Leeching Poison. Therefore, you should try and play the value game and seek to pressure the Captain with multiple big threats, while also keeping an eye on your life total. The Captain seems to lack any significant card draw, so if you manage to clear his minions until turn 6/7, you will have to deal with his buffed up Kingsbane, which would be an 8/4 at that point, on average. As for removal, the Captain’s deck contains a couple of Doomerangs for single-target removal (which heals him if he has cast Leeching Poison prior to that) and Blade Flurry for AoE. Do not overcommit on the board too much and make sure to use your hero power to either double-down on good spells you have already used, or make use of good spells that the Captain did. 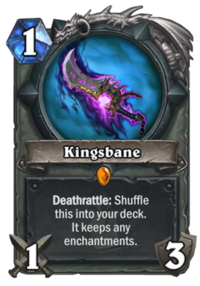 There are a couple of treasures that are recommended for this boss fight, but one is obviously a must-get: Potion of Vitality. This passive will double your starting health pool, allowing you to start the fight with 90 HP (instead of the baseline 45), which gives you a lot of breathing room to withstand the pressure that the Captain can dish out through his minions and his massive weapon. If you can take that passive a second time, it stacks, raising your starting HP for this fight to 180 and making this fight a stroll through the park! Regardless, you should always keep an eye on your health pool and make sure you are pressuring the boss enough without overcommiting, since you do not have any significant defensive options baseline and will be on the clock after a certain point in the game.

As for your win condition, it is recommended that you select the treasure Scepter of Summoning and draft quite a lot of big minions, so you can start playing them early on.  Getting a high number of good Jade cards seems to continue to be good here, especially when coupled with either Captured Flag (your minions have +1/+1) or Battle Totem (your Battlecries trigger twice). Aya Blackpaw is especially potent, as she can help you snowball the ball pretty fast and start hitting the Captain for 20+ damage each turn. Of course, Jades are not necessary to win this, as you want quantity over quality, so don’t be afraid to draft beefy minions, even if they are not flashy, provided you have selected the Scepter of Summoning of course. 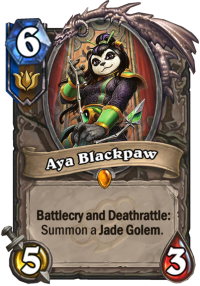 Your hero power is quite powerful in a value war, as it lets you discover 3 class spells that have been used in this game; and yes, that includes spells cast by the opponent! This mean’s that you can double-down on powerful removals or value generators. Discovering Jade Shuriken can be pretty powerful if you have drafted a Jade-focused deck or you can try and get the Captain’s weapon buffs and cast them on a Spectral Cutlass to heal yourself for a couple of turns.

One downside of Tracker is that class does not seem to have any healing available (the options during the draft are a combination of Hunter and Rogue cards), so your defensive options will be limited to a small number of taunt minions and any defensive spell you can get your hands on through your hero power, which let’s you discover any class spell that has been played during the game; and yes, that includes spells cast by the opponent! You can also get defensive options off of cards like Blink Fox. One great card that can help you stay alive is the Monster Hunt-unique card Cartographer, which you can select as a treasure during your run. It lets you discover 3 unique treasures, with some great defensive option, such as Nalaa, the Redeemer, Hallowed Water and Old Militia Horn among others.

If you survive the early game and manage to keep your hero relatively safe, you should be able to close out the game with your big minions, after you exhaust the Captain’s limited removal options. But above all, have fun! Now go hunt some Monsters!