War Master Voone is one of the nine bosses you will face in the Rumble Run! Learn some tips and tricks on how-to defeat him, a list of his shrines, and the cards he’ll be using to try and take you down!

War Master Voone is the leader of the Warrior team called Akali’s Rhinos.

Heavy Metal. The Rhinos love to charge headfirst into the fray. They’re all about big spikes, loud music, and melting faces. There’s no problem that can’t be fixed by bashing it away.

Each time you face War Master Voone he will be using one of the following Shrines. These are the same Shrines you will get the option of using when you start up a new run. 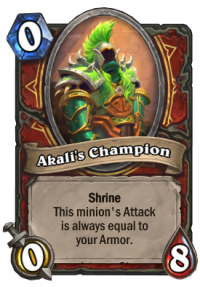 First Voone’s Shrine – Akali’s Champion – is a deck based around Armor and Armor synergies. The Shrine is very straightforward, but it can be incredibly powerful at times.

Since the Shrine has 8 health, it can be quite difficult to clear, but you absolutely have to do it. However, clearing the shrine is not the only way to neutralize the threat – most importantly, you want to run Voone out of Armor. It’s not an easy task, since his deck is full of ways to gain it – Armorsmith, Weapons Project, Shield Block, Ironforge Portal, Alley Armorsmith, Shieldmaiden etc. If he has a lot of Armor, then Shrine killing won’t be that easy too – most of the Shrines don’t fight back when you trade into them, but this one does. If Voone stacks Armor, your minions will die when trading, so once again, try to shave off the Armor as often as possible.

Important thing to keep in mind when playing against Akali’s Champion Voone is that the Shrine CAN attack right after reviving itself, it doesn’t have to wait a turn. Which means that you want to get rid of as much Armor as possible the turn BEFORE it revives. 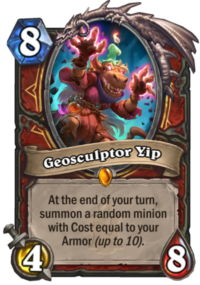 Akali’s Champion Voone can also summon big minions thanks to Heavy Metal! as well as Geosculptor Yip – the latter is probably the highest priority target. If Voone stacks 10+ Armor, it will pump out a massive minion every turn.

As for the removal, it mostly plays single target removals, such as Bash and of course Shield Slam – your single big threats will likely die. As for the AoE, it doesn’t really run any normal Warrior AoE, but the deck often plays Unbound Punisher, which is absolutely broken. For 8 mana it clears your entire board and gives Voone a lot of Armor for the trouble. This is something to absolutely keep in mind – after Turn 8, you don’t want to overextend. After he drops Punisher, however, you can play as many minions as you want, since the deck doesn’t run any other AoEs.

If your deck is aggressive, it might be very hard to win this matchup, since opponent will be constantly gaining lots of Armor. It’s probably easiest to just outcontrol them while handling their Armor. When out of Armor, Shrine is useless. When the game switches to your turn after it revives, you want to get rid of as much Armor as possible first, then the Shrine, and then other minions. 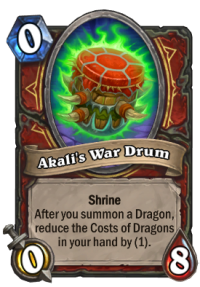 Akali’s War Drum is what I would best describe as a Control Dragon Warrior. The Shrine is very slow at start, but if you let it snowball, it can run out of control.

Every time Voone plays a Dragon, the entire hand gets discounted. That’s an incredibly powerful effect – remember how great a single trigger of Emperor Thaurissan could be? And in this case, the first trigger is hardest to get, but once he starts rolling, his whole hand will be nearly free, which would most likely result in you losing the game to the on-board tempo. Which means that you absolutely want to kill the Shrine.

Since the deck is quite slow AND packed with value, the best course of action would probably be rushing him down. Going for a value war might not be the best idea, because not only the deck runs a lot of high value cards, big minions, but also Dead Man's Hand for a good measure – that’s why don’t try to go for a long, fatigue game. Ideally, rush him down before he starts dropping bigger Dragons.

The deck’s early game is quite weak, it doesn’t run many small minions. Stuff like Alexstrasza's Champion or Nightmare Amalgam can be a thing, but very often Voone will just pass the first few turns. Most of the time, he starts his Dragon plays on Turn 4, and he has quite a nice curve – Twilight Guardian, Emberscale Drake, Book Wyrm etc. The deck can be quite powerful if it curves out nicely, but the curve I’ve mentioned is just an example. His deck runs A LOT of different Dragon options – Dragonmaw Scorcher, Cobalt Scalebane, Bone Drake etc. as well as some non-Dragon minions, e.g. Direhorn Hatchling and The Curator. 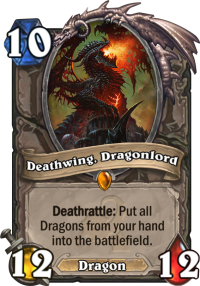 As for the late game package, the deck runs both Deathwing – Deathwing and Deathwing, Dragonlord. The latter can be especially scary. You can’t leave it alone,

Since it’s a Control deck, it also runs Brawl – try to not overextend too much. Since the deck is quite light on single target removals (Devastate and Execute are a thing, but you need to have a damaged minion), having 2-3 bigger minions is probably the most optimal number. At least until later in the game – Crowd Roaster is a thing in the deck and it’s a really solid single target removal.

What’s worth mentioning is that it’s a Highlander deck, it runs Kazakus. It means that it has only a single copy of each card – that’s why once you see one copy of a specific card, you can be quite sure that you won’t see another one (unless generated randomly).

The build can run Redcrest Rocker and Herald of Flame, both of which are very strong and have to be cleared right away. Redcrest Rocker luckily requires an Overkill and a Dragon on the board to take a full advantage of its effect, but it’s still a very high tempo play. As for the Herald of Flame, you really want to have a removal ready for if it comes down in the mid game. In the late game, Voone will probably be able to combo it with a Dragon right away.

As you can see, the deck has a very high late game power level – a lot of value, a lot of tempo, strong removals and of course Dead Man's Hand in case the game gets longer. That’s why, like I’ve mentioned already, the best course of action is rushing them down (but also killing the shrine, because you can’t let them snowball) – I would try to outcontrol them only if your deck is absolutely packed with value. 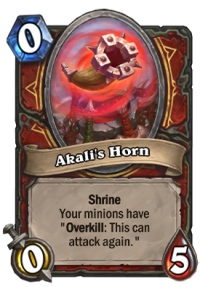 The final Voone’s deck – Akali’s Horn – is probably the weakest one of the bunch, at least from my limited experience. It’s mostly a Tempo deck with some Rush cards, but it runs a lot of questionable choices.

The Shrine is probably one of the weakest. Voone has to have a minion, the minion has to Overkill something, and then the minion has to take advantage of being able to attack for a second time (technically, he can always go face after attacking, but gaining some damage is not what you want from your Shrine).

The deck runs a lot of normal Tempo cards, such as Cruel Taskmaster, Frothing Berserker and Militia Commander, but also a bunch of more questionable choices. For example, it plays cards like Magnataur Alpha and Foe Reaper 4000 – while yes, they can take advantage of attacking multiple times, it’s quite unlikely that you will let them attack in the first place. 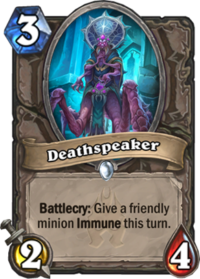 One thing to be aware of is Deathspeaker. If it’s dropped on a high Attack minion (such as buffed Frothing) when the Shrine is up, it can clear the entire board very easily. While you can’t help if he happens to combo it with a Rush minion, ideally you want to trade everything ESPECIALLY when the Shrine is about to go up.

Another card to be aware of is Ironhorn Drummer. It acts as a Commanding Shout as long as it remains on the board. On your turn, you can kill his minions without a problem. But on his turn, they can’t get below 1 health. Which, again, is quite problematic in a combination with Shrine – a higher Attack minion could clear an entire board since it can’t die.

So the general strategy would be quite simple. Kill the shrine, since it doesn’t have that much health. Control the board – don’t let them have minions up or else they can take advantage of the effects I’ve listed above, especially on the Shrine turns. But other than that, the deck is quite weak and you shouldn’t have much problems fighting against it.