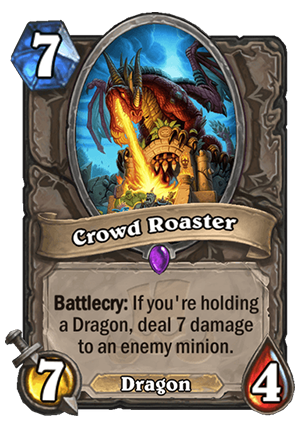 Battlecry: If you're holding a Dragon, deal 7 damage to an enemy minion.

Every major show has an opening act to warm up the crowd.
Tweet

Another Dragon-related card, Dragon decks are already starting to shape up into something viable (but we’ll have to play around with the cards to know it for sure). I really like this one, it should be a staple in any Midrange or Control Dragon deck. This card is a nearly guaranteed 2 for 1 – you destroy something (and not something small – 7 damage is a lot, only the biggest minion dodge it) and then your opponent has to deal with the 7/4 body. 7/4 stat-line isn’t particularly hard to clear so late in the game, but if your opponent can’t do that,

Overall, I think that it’s comparable to Blackwing Corruptor the damage was used as a board clear most of the time anyway, and despite a higher mana cost, 7 kills WAY more minions that 3 did. Should also be comparable to Firelands Portal – 7 damage is more than 5, but it can’t go face, so I’d say that it’s about even (maybe slightly weaker), but on the other hand, 7/4 is better than average stats of a random 5-drop, so that’s a win for this card.

Another thing worth mentioning is that it has a Dragon tag itself, which is very important on late game Dragon synergy cards. Drawing this earlier won’t make it completely useless, because you will still be able to use it as a Dragon activator.

I would say that it’s absolutely amazing at 8 damage, at 7 it’s just very good. That’s a massive difference – 8 damage could kill The Lich King, Giants, Ragnaros the Firelord (we might see a bunch of them from Jan'alai, the Dragonhawk, while 7 damage can’t. But I agree with that decision – I feel like it would be too strong at 8 damage.