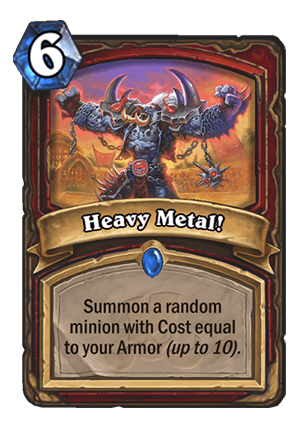 Summon a random minion with Cost equal to your Armor (up to 10).

This metal is so heavy it will satisfy your iron requirements for the next year.
Tweet

Remember Geosculptor Yip? That guy is an 8 mana 4/8 that plays this 6 mana spell. At the end of every single turn, as long as it stays on the board. So not only you pay only 2 extra mana for a 4/8 body (take a guess how good it is), but also for a potentially repeated effect (if he stays on the board for a second turn, casting it second time would pump the value up to 12 mana). And how much play he sees right now? Not much. He’s played in ~4% of the Warrior decks, most of which have less than 50% win rate. If you think about that, this card doesn’t look very good.

If it was Odd-Costed, it would make much more sense. After all, Odd Warrior is known for having lots and lots of Armor, so it would be easy to consistently summon a random 10-drop with it. Regular Warrior decks also have ways to gain a lot of Armor. Drywhisker Armorer, Weapons Project, Shield Block, even the Bring It On!, which comes with a downside, but if you could summon a 10-drop on Turn 6, it might still be worth it. This card might actually fit into heavy Armor-gain kind of Warrior that Yip also fits into. Yes, it’s weaker than Yip, but Yip is a really good card in theory, it’s just that classic Control Warrior just sucked for the last X expansions.

But you see, I think that even in a classic Control Warrior with Yip, there might be no place for Heavy Metal. One of the Yip’s advantage is that you’re getting roughly 5.5 mana worth of stats as a baseline, so even if you don’t have 10+ Armor, it can still work out. And if you have, you end up with TWO minions on the board, so it’s not as vulnerable to single target removals. Then – how consistently would you be able to use it on Turn 6? Keep in mind that regular Warrior can’t stack Armor as well as the Odd Warrior. Some chip damage from the opponent and you might not have 10+ Armor that you want. And playing it at let’s say 5-7 Armor is pretty bad, not only you don’t get any extra value, but you rely on RNG (and there are some really bad 5-7 mana cards, like 1/1’s). It might also be nearly dead against Aggro, you would need to wait until Turn 8 to combo it with Drywhisker to be able to play it in the first place, because they’re getting rid of your Armor nearly every single turn. And you really want to play it on the curve. Because a small tempo gain in the late game isn’t going to do you much good. If you aren’t planning to play it on Turn 6 most of the time, then why wouldn’t you just play some consistent big threats like The Lich King instead? If you’re a Control deck, you aren’t going to do much with the extra few points of mana in the late game anyway. Having 2 leftover mana (Lich King) vs 4 leftover mana (Heavy Metal) is rarely going to make a meaningful difference.

All in all, I could see this card seeing play, but only if an Armor-heavy version of regular Control Warrior would become good enough. And given how weak it is currently, I don’t think that it will happen.