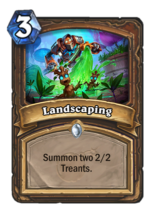 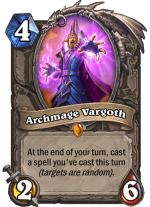 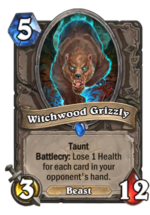 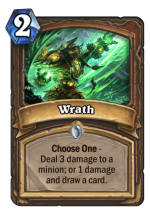 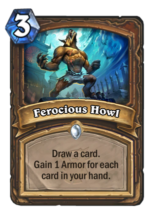 Wrath and ferocious howl or landscaping combine well together. Grizzly provides early surivability as well as dying early for those two witching hours, and wrath allows you to clear off turn 1 or 2 minions.

This deck utilises treants as a tempo survival strategy, also enabling the removal of this deck (the mulchmunchers). I’ve found these to be incredibly useful replacements for naturalize, whether at full cost or at 0. The witchwood grizzly + witching hour combo is also useful, and either witching hour or ferocious howl can be comboed with velen to create insane value.

The main win condition for this deck is the malygos otk. The 2 florists combine well with the selection of duplicating cards (you can even use faceless for something else due to the spare gloop sprayer) to create a huge amount of potential damage, but due to the treants and mulchmunchers I often find myself only having to chuck down a single malygos with some moonfires to finish off my opponent.

I have so far a 57% winrate (8-6) at rank 15-13 (but that includes the multiple iterations this deck has gone through so it should have been slightly higher). The deck counters various popular decks very well right now, doing well against tempo rogue (with its huge velen + ferocious howl armour gain) and having the potential damage to finish off even warriors. It’s a great refresher if you’re bored with the current meta!