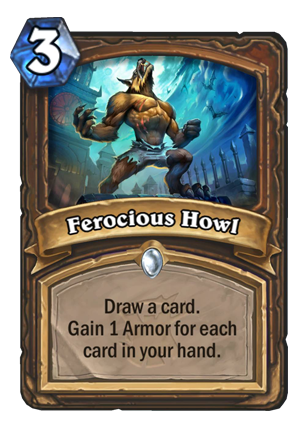 Ferocious Howl is a 3 Mana Cost Common Druid Spell card from the The Witchwood set!

Draw a card. Gain 1 Armor for each card in your hand.

Have you ever heard the wolf cry to the blue corn moon?
Tweet

This is basically a Druid’s version of Shield Block, but instead of always gaining 5 Armor, it gains anywhere from 1 to 10 Armor. Which is actually pretty solid.

This looks like a solid fit into a slower Druid deck. This is actually a bit like Branching Paths where you choose the Armor + Draw option, so you lose the flexibility, but it costs 1 mana less instead.

On Turn 3, depending on your Start and whether you open with a Coin or not, it should probably get you 4-6 Armor, which is good (more if you go all-in on the Hand Druid synergies and run Witchwood Apple). But the card shines mostly in the late game, after you’ve played Ultimate Infestation. After UI, your hand is often filled to its limits, meaning that you will usually be able to get 8-10 Armor from it. On the other hand, after UI, the cycling part is less important, because your hand is nearly full anyway and you don’t need more draw.

Probably depends on a meta, but if more Aggro and especially Combo decks (other than Exodia stuff that you can’t out-Armor) see play, this should be teched in into slower Druid decks as a counter. A solid card, nothing crazy good, but could see play even if Hand Druid doesn’t take off.