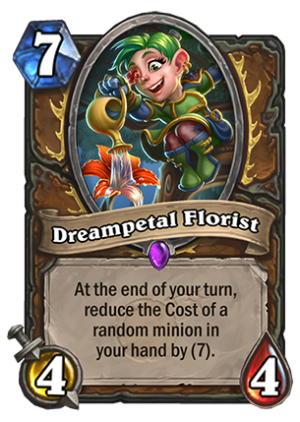 Dreampetal Florist is a 7 Mana Cost Epic Druid Minion card from the The Boomsday Project set!

At the end of your turn, reduce the Cost of a random minion in your hand by (7).

So. This is a card that can reduce the cost of Malygos from 9 to 2. And I still think that it might not be necessary, because Druids already have a way to get it out on the board, as well as they might not have enough space to put this card in. Hard to say at this point, but the deck is just getting more and more consistent. If anything, this will add redundancy – you COULD play it instead of Twig of the World Tree, but you can also play both.

7 mana cost on this is also very interesting. Thanks to that, it fills the 7 mana slot in Juicy Psychmelon. I previously didn’t think that the card will see play in Malygos Druid (because you would pull out like 2 cards at best), but with this one it actually might. Drawing both this and Malygos can potentially make the combo much quicker. The worst thing ever when playing the deck was having Twig near the bottom of your deck. The problem was that you didn’t only have to draw it, but also

The problem is that Malygos isn’t the only minion you play for the combo. Faceless Manipulator is a thing, and you will also play Flobbidinous Floop most likely. What if it hits one of those? Well, to be honest, nothing. If one of those takes the discount instead of Maly, you just drop Maly one turn, then play Floop + Faceless next, then Swipe + 2x Moonfire with +10 Spell Damage for 36 damage in total. All covered.

You COULD also combo it with Drakkari Enchanter on Turn 10 for double discount. But that seems unnecessary. One discount on anything is enough to combo down most of your opponents and adding unnecessary, clunky cards isn’t going to help overall. Theoretically, since this is an end of turn effect, it can trigger more than once, but that’s a wishful thinking. Emperor Thaurissan came down a turn earlier, was a 5/5 and it nearly never survived after the initial turn. This will share a similar fate.

So yeah, it is good in combo decks. It adds redundancy, and redundancy adds consistency. I don’t believe that it would see play outside of those – if you don’t hit a combo piece, this is a bit like playing a 0 mana 4/4 in the long run – you pay 7 mana now, then you get 7 mana discount later. But you might be able to do some tempo pushes, like discounting The Lich King and immediately dropping a Faceless Manipulator on it. Still, seems unnecessary. So I’m quite sure that this kind of powerful discount will see play in combo decks, if not now then in the future. Not sure if that was the devs intent, but this really starts looking like a Malygos expansion. Maybe they want people to have some fun with it before it rotates out to Hall of Fame? Who knows?