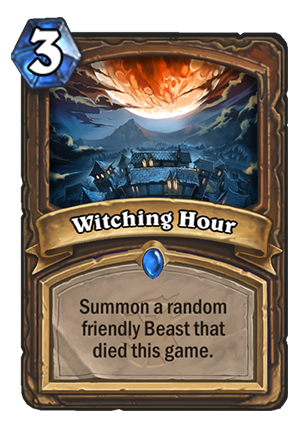 Witching Hour is a 3 Mana Cost Rare Druid Spell card from the The Witchwood set!

Summon a random friendly Beast that died this game.

The gates to the Gilnean pet cemetary MUST remain locked at all times.
Tweet

This is my favorite card art in this expansion, it’s just beautiful. As for the card, it’s far from my favorite, but I can’t say that it’s terrible.

Summoning a random friendly Beast that died this game doesn’t sound great, but how about Eternal Servitude? Is it a bad card? Of course it’s not, in Big Priest it’s usually 4 mana for a big threat. And you should look at this card in a similar manner.

And no, you don’t even have to play Big Druid to make it work. You just have to build your deck around it. You need to remember that this card only revives Beasts. It means that, unlike Big Priest, you can run all sorts of other minions and they WON’T disrupt this card. It’s not like you can randomly revive a Greedy Sprite in the late game or something.

If you play only a huge Beast in your deck, possibly a specific one, you can guarantee that you will revive it with this card. For example, the newly revealed Witchwood Grizzly. Since Battlecries don’t proc when summoning, you will get a 3 mana 3/12 Taunt – amazing! Even better, if you can somehow play an even bigger beast, let’s say something like Tyrantus or Hadronox, then this could revive it for 3 mana. However, those cards are pretty bad by themselves, so yeah.

The best one would probably be Charged Devilsaur. If you SUMMON it, as opposed to playing it, you can immediately go face. Devilsaur + Carnivorous Cube combo is already kind of a thing, and this could make it even easier. Being able to revive extra Devilsaurs for just 3 mana could be very powerful, even without any discounts (like Quest), this + Cube + Naturalize combo would be 21 damage to the face, with 2x 7/7s left on the board. It’s definitely an off-meta deck, but hey, it might be worth trying.

But there’s a catch. The Scarab tokens you get from Spreading Plague and Malfurion the Pestilent are also Beasts. It means that if you want to make it work reliably, you’d have to drop those cards, especially Spreading Plague, which would flood the revive pool with lots of 1/5 Taunts. I mean, 3 mana for a 1/5 Taunt is not the end of the world, but if you build your deck around reviving some big Beasts, it’s not really going to work.

Another HUGE problem is Polymorph and Hex. Since the tokens summoned are also Beasts, they will be added to the revive pool, and that obviously sucks.

I think that this card has lots of potential. Yes, you will sadly have to make some difficult cuts for it, but the same can be said about Big Priest. The deck could not run any other minions beside the few it did, and it still worked. Right now there probably aren’t enough cards to support the archetype, but it’s something we might see in the future. Or even this expansion depending on the other Druid cards that are waiting for us. “Potential” is not enough to get a high rating from me, though, as it might be difficult to apply in an actual deck.