Learn how to play this archetype with our Big Priest Deck List Guide.

Our Wild Big Priest deck list guide will go through the ins-and-outs of this deck! This guide will teach you how to mulligan, pilot, and card substitutions for this popular list!

If there’s ever a deck that needs no introduction, it’s Wild Big Priest. In part, this is due to the frequency at which Barnes introduces high-cost minions into the battlefield far earlier than should be possible. With a plethora of Resurrect spells in Wild, Big Priest is capable of layering threats turn after turns, must to the frustration of opponents. 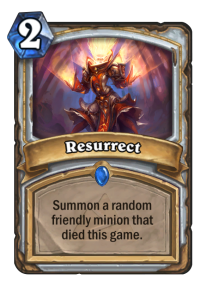 While many will dismiss the deck as a high-rolling monstrosity of “draw Barnes and win”, the deck is a bit more nuanced than many give it credit for. The fact of the matter is, you will not draw Barnes on curve every game. Pulling out victories when this is the case is the difference between piloting the deck and chasing nut draws.

Even when Barnes is nowhere to be found, Wild Big Priest can take advantage of Priest’s numerous removal spells to stall out aggression long enough to find Shadow Essence and get the Resurrect train rolling. Managing resources effectively is the key to winning such games

Check out our in-depth Standard deck guide to Big Priest!

With the release of Kobolds and Catacombs, Wild Big Priest went from occasional nuisance to dominant force in the Wild metagame. This is, in large part, thanks to the introduction of two new potent spells: Lesser Diamond Spellstone and Psychic Scream. Both of these cards contribute to Big Priest’s game plan of efficiently removing enemy minions and bringing big minions back to life. This pair of seven mana spells propelled Big Priest to the top of several Wild Tier Lists.

The cards in Wild Big Priest can be sorted into one of four categories: Defensive Tools, Minion Cheating, Big Minions, and Resurrection Spells. The exception, of course, is Shadow Visions which provides you the flexibility to find the spell you need for a given situation.

It doesn’t matter how big the minions in your deck are if your opponent is killing you before they come into play. With that in mind, Wild Big Priest runs an assortment Defensive Tools to survive the onslaught of damage common in the Wild format.

An important facet of Big Priest is cheating out minions to add to your res pool several turns before you’d typically be able to naturally play them. Barnes and Shadow Essence both fulfill this purpose quite well.

Big Priest is nothing without big minions. The assortment of high-cost minions below provides a nice balance between frustrating roadblocks and powerful aggressors.

Your big minions (or, at the very least copies of your big minions) are going to die frequently. Fear not, young Anduin! For this assortment of Resurrect Spells will bring them back bigger and better than they were before!

For many Big Priest novices, the mulligan phase boils down to “throw away anything that isn’t Barnes.” Sure, Barnes has an absurd impact on the deck’s win rate when held in the opener, but mulligans are a little more nuanced than blindly seeking a single Legendary card.

In Wild, especially, hard-mulliganing for Barnes can simply leave you dead on turn four or five. Depending on the matchup, you may need to dig hard for Defensive Tools that fit the deck you’re facing. As is typically the case, it pays to err on the side of caution and assume your opponent is running aggro if you’re uncertain. 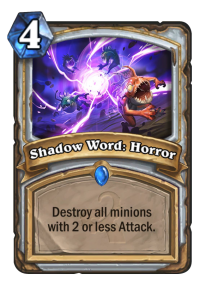 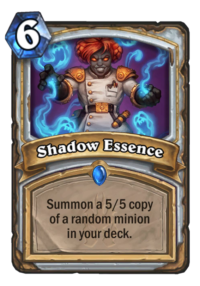 Introduction to General Strategy goes here. You can break up your play strategy into specific matchups, or keep it to Aggro/Control like is represented below. 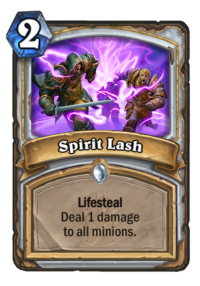 Against aggressive decks, your primary goal is to survive the barrage of incoming damage. Fortunately, Wild Big Priest has numerous tools to support this gameplan. Spend early turns removing high-priority minions and wipe the board when appropriate.

Occasionally, in these matchups, Barnes on turn 4 is (surprisingly) not the play. Frequently, simply dropping this blonde bard leaves you dead in the next turn or two (barring an Obsidian Statue pull, of course). Try to pave a clear path for Barnes with Shadow Word: Horror and enjoy the easy victory.

Without Barnes, things get a little more complicated. Fear not! You still have access to several turns of board clears and significant healing potential with Greater Healing Potion. If you’re able to grind your opponent out of resources by about turn eight, you begin hard-cast minions into play. Even after paying full price for your minions, layered Resurrect effects allow you to bring them back turn after turn until the game over. 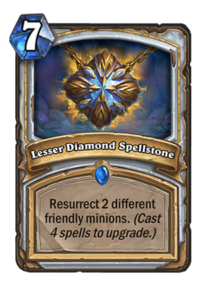 Against Control Decks, your gameplan changes dramatically. Often, you spend the first few turns doing nothing, so patience is key. If you’re going to float mana on upcoming turns, it makes sense to wait on Shadow Visions to give you a better read on your opponent’s deck and get better odds at finding the spell you require.

Here, you can begin to mulligan much more aggressively for Barnes. It’s these longer matches where he really shines anyway. Bringing him out early makes it possible to bring fully-statted minions back onto the board far earlier than should be possible.

When Barnes goes into hiding, Shadow Essence can pick up some of the slack. You really don’t want to pay full mana for your first minion in these matchups, so dig deep for this card with Shadow Visions.

Finally, Lesser Diamond Spellstone reigns supreme in these matchups. If you can ramp up this spell, returning four minions to the board can be backbreaking for opponents.

Generally, the core of Wild Big Priest is irreplaceable. Barnes, Y'Shaarj, Rage Unbound, and many of the Epic spells are irreplaceable in this deck. That said, some of the Big Minions are a bit more flexible. The list below provides some Big Minion substitutions at each rarity.