Our Hand Druid deck list guide will go through the ins-and-outs of the potentially viable deck from the The Witchwood Expansion! This guide will teach you how to mulligan, pilot, and substitute cards for this archetype! For now the deck guide is theorycraft, but as soon as the expansion goes live we will start updating it right away!

According to the majority of the Hearthstone community, Druid hasn’t received the greatest additions with the newest expansion “The Witchwood”. The class surely had more than fifteen minutes of fame in the last Standard year, not at last thanks to the Jade mechanic which is now gone for good.

But Team 5 has other plans with Druid: Looking at the newly released cards, profiting from a lot of cards in your hand seems to become an upcoming archetype. We know that this kind of archetype can work like a charm, and Hand Warlock is a great example for it. But does Druid already have enough tools to make a draw-centric control list work?

First of all, there is one big drawback when comparing Hand Druid to Hand Warlock: It does not have a Hero Power that draws cards basically for free. Many may think that this alone disqualifies Druid from nurturing a valid draw-centric archetype.
However, Druid has another way of cheating its way into a hyper-control meta: Ramp. Yes, cards like Mountain Giant or Twilight Drake get better with every additional card in hand, but what if you can play them a turn earlier instead? That thought is essential if we want to understand the purpose of these new “Hand” cards. That’s enough theory, for now, let’s get into the General Strategy of this deck! 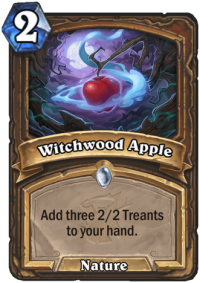 One of Druid’s new spells, Witchwood Apple, does everything Hand Druid needs: First and foremost, it provides three cards for a mere 2 mana. It also results in having three decent 2/2 tokens in your hands that you can contest the board with if you didn’t hit one of your “Hand” minions after the mulligan. Just remember: If you are going second in the game, and if you play this card on turn 2, you can play Mountain Giant on turn 3. That alone makes this card good enough to get included into this list.

Ferocious Howl is another tool to collect cards in your hand and cycle through your deck to get to your precious minions. 3 mana for drawing one card may sound ridiculous in the first place, but the Armor gain based on hand size is nothing to sneeze at. As we know from cards like Branching Paths, Armor is a valuable resource especially against Aggro opponents, and Ferocious Howl will most like produce 4 to 6 Armor when being played. It is also a great topdeck in the late game, just because you don’t care about Armor in that moment anyway and may want to cycle through your deck. 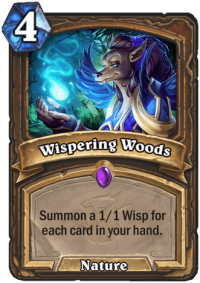 Wispering Woods is another spell that profits from a lot of cards in hand. For 4 mana, you only need to have four other cards in hand to make this comparable to a card like Stand Against Darkness. Druid of course has not as many tools to buff its token on board as Dude Paladin has, but again, if you have played Witchwood Apple on turn 2 or 3, this card easily creates six or seven wisps on the board. With that in mind, Power of the Wild and Branching Paths can easily bolster up this powerful board state even more which creates a solid answer to Aggro archetypes like Dude Paladin or Tempo Warrior. It is also possible to tech in a Savage Roar which makes Wispering Woods a legit threat that could represent 23 damage on board on turn 5 if seven wisps are in play.

Bewitched Guardian is the only new minion in the deck, and there is not much to say about it. Most players call it an expensive Twilight Drake, and they are not wrong with that. It is fair to justify the addition of Taunt for 1 additional mana, but based on the evolving meta game, it is absolutely okay to run just one copy of this minion. It can still curve pretty nicely if you play it after everyone’s favorite drake, and that really is the only reason why we run that card in the first place, because Nourish is still the number one play on turn 5 for this list.

As already said, Mountain Giant is the real backbone of every card-centric control deck, and that doesn’t change for Hand Druid. Getting an 8/8 into play on turn 3 will be unmatched and could be one of the reasons that this archetype can compete in hyper-control matchups even without the help of the Jade mechanic.

All other cards in this list represent Control Druid at its finest:

In the end, Hand Druid seems to be a solid choice for the rocky road called meta game that lies ahead of every player with the introduction of both the Witchwood and the Year of the Raven. Due to great amounts of board clear and token minions, this deck will perform insanely well against any Aggro archetype, and the potential to cheat out a Mountain Giant or Twilight Drake on turn 3 also increases win rates against mid-range or control lists.

The newly introduced cards may not be able to fill the shoes of the old Jade mechanic, but Hand Druid lists have a great base that can get improved through tech additions like Spellbreaker, the Astral Tiger/Oaken Summons package for example to adjust to the current meta situation.