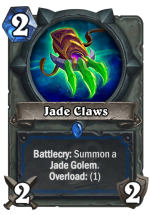 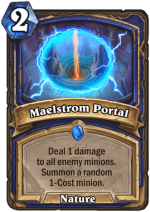 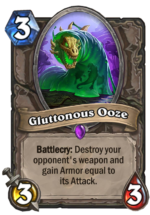 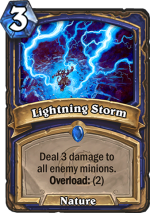 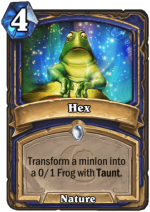 Hello everyone. Earlier this week I posted a Control Shaman Deck featuring Jades and Elementals, but realized now that many cards will leave Standard, when the expansion arrives, like Elemental Destruction and Healing Wave. This time I made a standard deck, which turned out to be a Mid-range Control Type, which at first doesn’t include any healing methods, but if you are facing a lot Aggro Decks you could swap 2 Earth Elemental for 2 Jinyu Waterspeaker, depending thought on what kind of Aggro Decks you face. Against many Pirate Warriors Earth Elemental is better, because you don’t allow your opponent to attack your face with weapons. Discardlock and Aggro Rogue though have some damage giving spells like Soulfire and Eviscerate. Those can be problematic, but i would still recommend to use in both cases 2 Earth Elemental.

Your main concern is to keep the enemies board side empty, while you build your Jades and bring up the big Elementals. This is surely not a Tier 1 Rank 1 Deck, because it is dependent on your survival till mid-game. In late game you should almost always win due to the many big threats, but getting in late game is very hard today. It is a good deck, but will struggle quite a bit with Aggro Decks.

Use Fire Fly for the Elemental activation or for early presence. To use the most out of Volcano, try to only play it, when your opponent has many minions, preferably small to medium size minions, to maximize the effect and disadvantage for your opponent.

When facing classes such as Priest, Mage and Warlock that have many big removal spells like Entomb, Shadow Word: Death, Potion of Polymorph Polymorph, Blackcrystal Potion and Siphon Soul, try to bate them to use these on smaller threats like a 5/5 Jade Golem or a Jade Chieftain. Getting Earth Elemental,  Aya Blackpaw and/or Ozruk would be a disaster. In the case of first a big minion dies instantly with 3 overloaded Mana Crystals in your disadvantage, in case of second you loose a medium sized minion and potentially a second Jade Golem through Entomb, Potion of Polymorph and Polymorph. In the last case you loose your biggest minion. So bate is the most important thing.

Don’t immediately play Stone Sentinel when you can, you need to play around big AoE spells like Elemental Destruction Twisting Nether Flamestrike and Dragonfire Potion. You should almost never overextend your board. You can do, if you are sure he isn’t trying to bate you or he doesn’t have any AoE Spells left, if he played already some.

I chose Gluttonous Ooze, because of the many successful decks running many big weapons such as Warrior. The extra health can be helpful and besides, you can see this as a healing pack.

So that was pretty much everything I am able to explain about this deck for now that probably needed explanation.  Can’t wait to try it out. I need only one more Earth Elemental apart from the Ungu’ro Cards, but I bought 50 packs, so I should be able to inform you all if its successful or less successful shortly after the launch.

Update 2: I took 1 Volcano and 1 Maelstrom Portal out and placed 2 Mana Tide Totem for the lack of no any card draw cards. At least this way you have two Totems for that. Plus the volcano isn’t useful in mid-game and late game, only for early game against Aggro Decks and Maelstrom Portal the same, because there isn’t any Spell Damage card in the deck.

Additionally I will test the viability of Tar Creeper and if not Tol’vir is rather better.